This article is taken from VSFA Newsletter No.46, May 1980

It will come as a surprise to many, particularly those in the field to learn that Ian Edwards, Forest Mapper, Film Buff, Horticulturalist, Raconteur and self confessed Forester Baiter has resigned.

It came as no surprise to a former Forest Assessor whose reaction 'what, not again! he will be back' was no doubt influenced by his experience of previous events of a similar kind.

In fact Ian had several stints with the Commission as a chainman during those heady trail blazing days in Assessment, so vividly described in the memoirs of an outstanding forester in the previous edition of this newsletter.

These periods of work - from 3 months to 3 years in duration - were interrupted by resignation on several occasions either because of his wanderlust and urge to travel or his disenchantment with the hardships and primitive conditions of Assessment camps in remote mountain outposts. Being required to work during winter on the Deddick Plateau and pitch his tent in heavy snow did much to hasten one such departure. Being required to work during the weekends at a certain other location prompted another.

The rigours of Assessment in the early days appeared to have a beneficial effect on Ian as even in his early forties he was often mistaken for a fresh faced lad of twenty.

After travelling and working overseas and returning back home broke, he inevitably fronted up at the door of the Forest Assessors' office seeking to regain his old job. By this time he had built up a reputation as a proficient chainman and bushman with a keen interest in all aspects of forest mapping, including identification of trees and shrubs and the mapping of topography and forest species associations.

During the late 1940s, 1950s and early 1960s he worked on many assessment projects mainly in the mountain areas of the state, although later also in plantations. Most of these early days were spent in pack camps at locations such as Mt Pinnibar, Stony Creek (Heyfield), Mt Skene, Connors Plain, Mt McKinty and Glen Wills. Any history of the Commission during this period would be incomplete if it did not record the exploits of Forest Cruisers and Mappers such as Bruton, Hardy, Edwards, Brash and others and their valuable contribution to the assessment of our timber resources.

During his 25 years of service he demonstrated an exceptional ability as an air photo interpreter and forest mapper working in many forest districts and more recently based in head office. His skill in identifying categories of forest (size, species, height density and quality classes) from aerial photographs is unique. There were few if any other officers in the Department who could commence a project with a set of aerial photos and conclude with a finely draughted and coloured map of detailed information including field checking and classification and identification of botanical specimens. He was the unquestioned authority in these fields and has been responsible for advising and training a large number of professional and technical officers in photo mapping procedures.

Despite persistent efforts to achieve a high classification the structure of the bureaucracy was such that he could not advance to a level which would provide a renumeration more consistent with his skill, work performance and obvious value to the Commission. 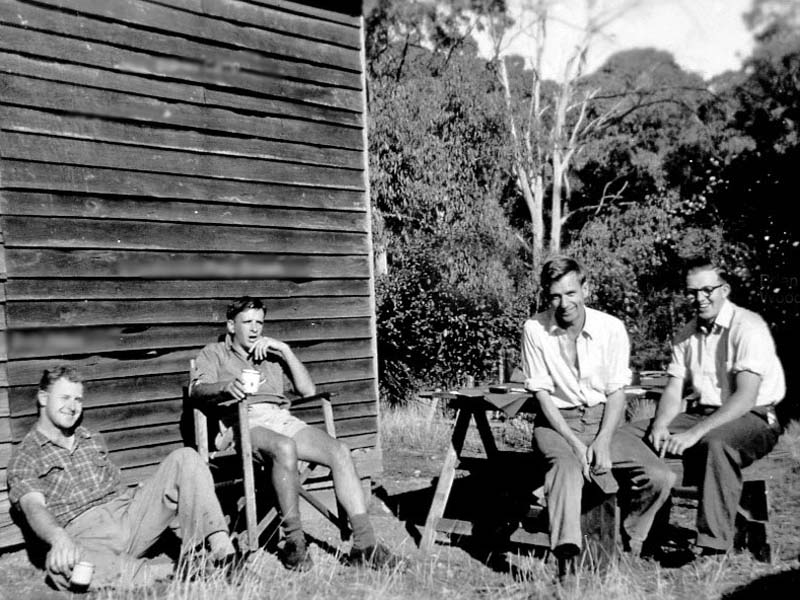 Ian was not noted for his adherence to convention and red tape and was fond of locking horns with those foresters at the highest levels of authority - many of them felt the fury of his argument and the sting of his scathing wit.

He took particular delight in enlightening young foresters fresh from Creswick or University and flushed with idealistic concepts of forest ecology, as to how things really worked in the bush. His observations on the climatic and topographic factors which controlled the distribution and development of Eucalypts and other species provide a valuable lesson for many not so observant or experienced foresters.

Ian is the sort of person who has the capacity to make his presence felt in any gathering; he is a man of many interests and enjoys a lifestyle which presents quite different facets of his character to different groups among a wide circle of friends and acquaintances.

Because he is cosmopolitan in outlook, city life holds quite definite attractions for Ian with his fondess of good wine, food and friends and his wide ranging interest in everything from Boccaccio to Bonsai to Zefferilli.

To many forestry friends however he always seemed more at home in the bush and if that bush was a stand of alpine ash on a sunny alpine day then Ian would be in his element.

To see him heading off down Bourke Street to his favourite health food bar dressed in jungle green jacket, moving quickly with that purposeful long striding gait, weaving his way through lunch time shoppers seemed somehow out of place.

Ian left the Commission so he could devote more time to other interests including the preparation and culture of bonsai and he eventually hopes to visit Japan to study the collection of the masters.

Ian will be missed not only because of his work talents but also because he was a stimulating and refreshing personality in what appears to some to be a fairly conservative organisation whose forester staff are tarred with the one brush (one of IBE's favourite retorts - 'They all think the same, turn any Victorian forester upside down and you will see 'Made in Creswick' stamped on the soles of his boots.

Ian Edwards will be mlssed for his good humour and his good company which were highly valued by his workmates.