While every forester is familiar with the "windmill stand" type of wooden fire tower, some may not have had the opportunity of seeing a single pole tower. Such a tower is located at Stringer's Knob in the Orbost District.

It was built as an experiment in 1941 at the suggestion of Mr. H. Galbraith, who was then Inspector of Forests in East Gippsland.

The tower pole is 110ft long (100ft above the ground and 10ft below), and as there were no suitable trees of this size in the locality, two trees - a yellow stringybark and a red ironbark - were felled and bolted together. The sapwood of both trees was removed by means of a broad axe, and they were trimmed so that they tapered uniformly towards the head.

The pole was pulled upright by means of a 35 HP tractor and an elaborate block and tackle system. When it was effectively secured, an 8ft square cabin was built on top of the pole, which had a head diameter of 17 inches. A ladder to the cabin was made by driving two vertical rows of iron bars into the pole.

After 25 years the Stringer's Knob tower is still used as one of the primary detection points in the Orbost District. It is showing very few signs of deterioration and it probably will give a longer service life than the conventional wooden towers. However, it is unlikely that any more single pole towers will be built as even the Forests Commission has accepted steel as a substitute for wood in the field of tower construction. 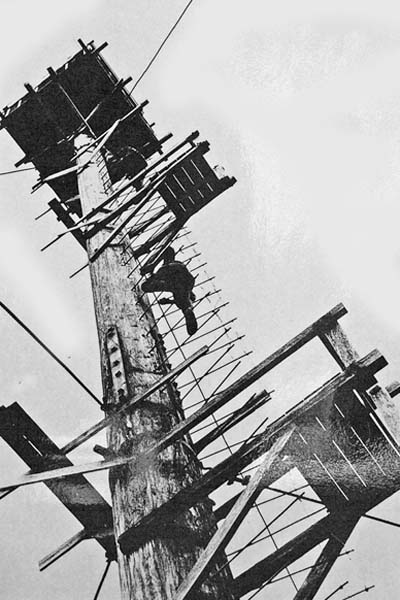