In 1947 the FCV purchased an area of land at North Altona from Brooklyn Quarries Pty Ltd. (Map here) In this article the site is referred to as North Altona, although the facilities and functions delivered on the site have changed dramatically since 1947.

The original allotment has been reduced by the granting of an easement to the former State Electricity Commission, the leasing of land to the local Italian community for the building of an Italian Social Club, and by the sale of a parcel of land on the southern boundary.

The current site is located in Kyle Road, North Altona – (Same map as earlier) In 2019 the area of the property was 2.31ha.

The land on the eastern side of Kyle Road, which is no longer part of the North Altona site, was originally used for the purpose of a FCV firewood storage depot and workshop. It was called the Brookwood rail-siding, and was one of several firewood storage depots close to and in Melbourne, the others being in Toorak, Fitzroy and Kew. These firewood depots were a part of the FCV's post-WW2  involvement in supplying firewood to meet community needs.

In December 1950 a large fire at this depot destroyed more than 3300 tonnes of firewood.

The sky over Melbourne was red last night from fires through out the metropolitan area. The main outbreak was at Brookwood where a Forests Commission Fire wood depot was practically destroyed.

No estimate could be obtained of the damage last night but it is expected to run into tens of thousands of pounds. The fire will also seriously hit Melbourne’s winter firewood supplies, a shortage of which has already been forecast.

This presentation will show you how this site is being used as at September 2019.

The Central Store probably operated from the early 1950s and consisted of two adjoining buildings:

Both buildings housed a wide range of stores for requisition by field and workshop staff, including tractor and fire pump spares, hose couplings, and camping equipment that was despatched during emergency fire periods.

This facility ceased operation in 1993. The two buildings were removed from the site, and the stores function was transferred to what was originally the Lands Department store in Maribyrnong.

The original asbestos-clad workshop, which probably began operating in the early 1950s, had a floor space of about 1000m2 and consisted of a general office, a main workshop, hose room, electrical room, tool room, welding shop, spray paint booth and two internal garages.

In 1957 ED Gill, who was then the Assistant Fire Protection Officer with the FCV, prepared a publication presented to The Seventh British Commonwealth Forestry Conference in England. A chapter entitled ‘The Selection and Development of Fire Fighting Equipment’, detailed the rationale for the fire equipment purchased, developed and evaluated at the workshop

During the 1960s and 1970s the Workshop played a key role in fire tanker assembly, and the repair and maintenance of all FCV fire pumps, hose and ancillary equipment. In 1985 it was decided that the Workshop would, in future, place a greater emphasis on research and development, and that the existing fabrication and maintenance roles would be wound down. The facility became known as the Fire Equipment Development Centre. (see below).

Additional facilities were constructed in the 1980s and 1990s, including:

The Fire Equipment Development Centre was still in operation at the time this article was created and it included:

By 2000 all the original structures on the site, including the asbestos-clad Fire Protection Workshop, had been replaced with new standardised green Colorbond buildings.

In summary, the site has undergone significant upgrade over the past fifty years - and of course it should have. These days it is a far cry from what I remember when I first visited the site in the late 1960s - a somewhat decrepit, over-grown thistle and grass covered property, with broken down fencing and scattered building materials.

During the 1970s, along with fire hose test and repair and fire pump maintenance programs, the next generation of fire tanker cab/chassis would be introduced. The petrol powered 'M' Series 4x4 Bedford fleet replacing the earlier RLHC Model tankers would be built on site, with the exception of the 900 gallon water tanks which would be outsourced to a contractor. Construction and assembly of the 'M' Series Bedford tankers continued for the next eleven years until the introduction of the Isuzu JCS 4x4 diesel cab/chassis vehicles in 1983. This was the end for the petrol-powered Bedfords.

In the 1960s to early 1970s the 38mm linen hoses would be laid out in their full 30 metre length in the hose cleaning bay. The bay consisted of a 30m sloped concrete slab which provided water drainage during test operations.

At one end of the bay there was a pressurised water manifold consisting of a 38mm pipe fitted with six evenly-spaced gate valves. The manifold, a permanent structure, was assembled at a height of approximately 600mm to provide ease of operation.

The female end of each hose was attached to the manifold gate valve and the opposing male threaded end fitted with a blanking cap to allow each hose to be pressurised.

Each hose would be washed and scrubbed with a firm bristle brush to ensure that it was clean.
The hose would then be pressure-tested to 350psi to identify any pin-holes which would be marked with an indelible pencil for repair.

Once the hoses had been pressure tested they would be hung out to dry in the hose drying tower then transferred to the hose room for repair and re-roll, prior to being returned to the hoses' allocated Districts.

It was not an uncommon practice with the FCV during this period to use 38mm percolating linen fire hose on the fire line. Percolating hose allowed the outer wall of the hose to become wet under pressure; they were pricked during construction to encourage weeping so that they remained wet during use. This was to help protect the hose if it was dragged over hot embers at the fire-line.
Test Requirement:
Fire hose undergoing a hydrostatic leakage test shall not lose more than 3.7cc of water per foot of length per minute when at a hydrostatic pressure of 100 lb/sq.in, and not more than 14.2cc per foot of length per minute when tested at a hydrostatic pressure of 200 lb/sq.in.

The hydrostatic leakage test was a separate test to the standard fire hose water pressure test of 350 lb/sq.in.

In 1985 it was decided that the Workshop would, in future, place a greater emphasis on research and development, and that the existing fabrication and maintenance roles would be wound down. The facility became known as the Fire Equipment Development Centre. Over the following more than 20 years the R&D Centre produced a vast range of fire and associated equipment gaining a reputation as a leader in fire equipment development and innovation both nationally and internationally.

In addition to major developments described elsewhere (links) the FEDC introduced many other significant innovations in the equipment used in forest fire management. This series of Fire Equipment Notes describes many of those innovations.

From some time in the 1950s Jim Hennessy was the FCV's Fire Equipment Officer. However, little is known or documented concerning his history with the FCV.  He did develop a Wye-valve which was subsequently patented under the name Hennessy Gate Valve. Jim also developed the original fire-hose re-roll and regreasing machine. He retired in about 1969 and was succeeded in 1970 by Ronald Grant.

Ron Grant had a staff of about eight or nine people and Barry Marsden was his assistant from 1971. The staff  in 1971 were Ron Grant, Doug Nightingale, William (Bill) Burns, Les Bell, John Suban, Les (Toby) Dickson, Sid Butt and Don Englezakis who was the Clerk.

In the early 1970s the FCV's Heavy Plant Workshop at Newport (link to separate article or description) ceased operation, and some staff relocated internally and some left.

Jim Haggart, the FCV’s Engineers Branch chartered Mechanical Engineer, and Ian Matheson joined forces after leaving to conduct Structural Engineering courses. Jim also published a book called 'Metal Where It Matters', written as a guide for technical and trades people to evaluate the causes of failed welded components on machinery, and how to affect a satisfactory repair.

Mick Nicoloudio later went on to become Manager of the Lands Department workshop in Maribrynong . In March 1977 Lodovico Petranich, a gentleman and excellent mechanic, retired.

The Maribrynong Lands Department workshop ceased operation in 1991 and an apprentice and mechanic were transferred to North Altona as a result.

John Murphy, along with the FCV Mac float, were later also transferred to North Altona. 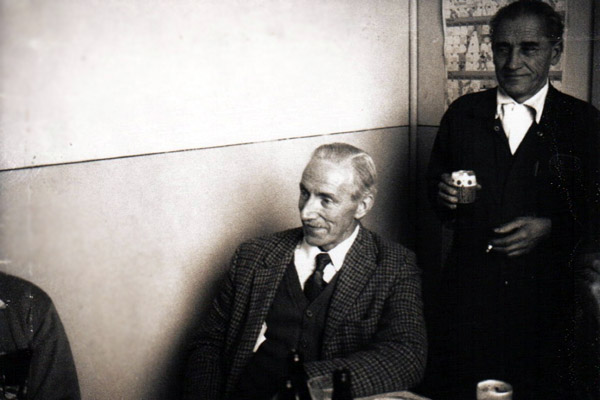 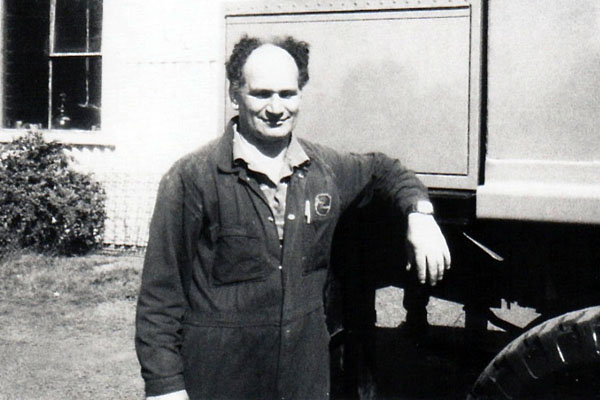 Mick Nicoloudio on his last day at North Altona
1976
Photo: B Marsden 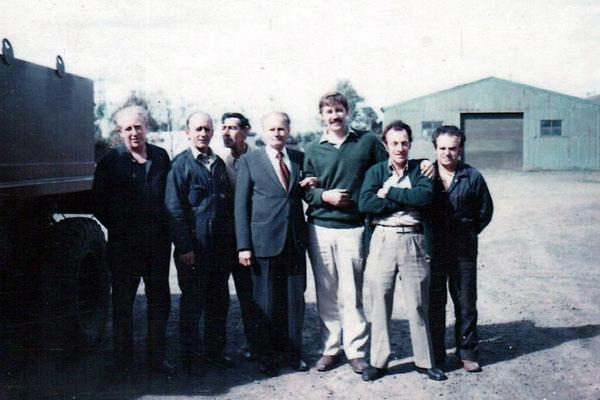 John Murphy with the Mack Float
1992
Photo: B Marsden