Barry Marsden was the lead player in the development of the new aerial ignition machines based on the "Premo Principle", and the Aerial Drip Torches described in this article. Bryan Rees played a key role in field testing the "Premo" machine.

From 1968 aerial ignition became an important tool in the management of fire operations in Victoria's forests.

Aerial ignition techniques used for suppression of a wildfire. Specially developed incendiaries (DAID's - Delayed Action Incendiary Devices) were dropped from a helicopter to burn out 5,000 acres between a safe control line and the advancing front of a large and damaging forest fire." (B Rees)

Aircraft, both rotary and fixed-wing began to be used for fuel reduction burning over large areas. Helicopters were used regularly in large scale back burning operations performed as part of fire control operations, and they also came to be used to ignite burns as part of the regeneration operations in native forest after timber harvesting.

A valuable insight into these early operations for fuel reduction burning is provided by Con Wood in a paper presented in Vancouver, Canada in 1973. and extracts from his paper are provided below.

On the basis of local research into the use of controlled burning to reduce fuel accumulations under safe conditions, and a recognition of the fact that devastating wildfires would continue to occur unless a radical new approach was taken, a policy of large scale scientific application of fire has been introduced. An essential aim is to avoid possible damage to growing stock and soil structure. This can be achieved by burning under carefully prescribed conditions which ensure that an unconsumed layer of material remains. Such conditions arise when the lower layers of the fuel bed are moist, resulting in what is termed a "cold burn".

On this basis, it has become an operational procedure in south eastern and Western Australia to carry out prescribed burning over large tracts of the Australian bush at frequencies from 4 to 8 years.

Since the 1920's aircraft have played an important role in forestry in Australia. In the early years they were principally used as aerial platforms for observers, and due to a lack of availability from civil sources, were almost exclusively hired from the Royal Australian Air Force.

It was not until the 1960's, which heralded great expansion in the agricultural aviation, charter, and airwork industries, that foresters were in a position to utilise light aircraft to develop the many and varied specialised airwork applications that collectively comprise forestry aviation. Today, the Forests Commission of Victoria engages light single and twin engined aircraft and helicopters for some seventeen functions on a routine basis, ranging from forest establishment by aerial seeding to management with sophisticated photographic methods, and protection by fire-bombing, control of insects and diseases, and a variety of other techniques.

Once the need for large scale controlled burning was recognised as an essential objective, it became evident that the key to treatment of large areas during the brief periods of suitable weather was the use of incendiaries dropped from aircraft.

Two separate developments ensued - a helicopter technique introduced by the Forests Commission of Victoria, and a fixed wing technique developed by the Commonwealth Scientific and Industrial Research Organisation in collaboration with the Western Australia Forests Department.

Both techniques are used in Victoria, where the annual area fuel reduced is increasing towards 1 million acres.

A fundamental of both techniques is that throughout the area to be fuel reduced, sufficient ignition points must be established to enable each indidual fire to join with its neighbours overnight following the day of lighting. Too few fires will mean that unburnt areas will be subjected to possibly more severe weather the following day, too many will expose parts of the area to high fire intensity at junction zones where two fires meet, during the afternoon of the day of lighting, rather than in the cool conditions of night.

Helicopters are well suited to aerial ignition because excellent visibility allows easy recognition of irregular boundaries in rugged terrain, slow flying permits accurate placement of incendiaries, and excellent manoeuvrability at low speed enables a high degree of control over the lighting pattern even in the steepest terrain.

The incendiary used, known as (Delayed Action Ignition Device), is a 7 inch length of 30 second safety fuse coated for half its length with modified match head compound. This is covered with a layer of high melting point wax to prevent accidental ignition by friction. The other end of the fuse has a small quantity of match head compound for striking and igniting the incendiary.

The length of the fuse allows a seventeen second delay between striking the small end, and intense flaming of the large end, which lasts for 40 seconds.

This method employs a semi-automatic incendiary dispensing machine installed in light twin-engined aircraft. The machine ejects capsules on a time interval, resulting in a geometric grid pattern of ignition points throughout the designated area. This technique does not permit precise placement of incendiaries on specific targets along a flight line, but it is a much faster method than the helicopter technique and is generally cheaper. It is ideally suited to areas where the fuel type is reasonably homogenous, and the terrain is not mountainous.

The machine occupies the space of a conventional passenger seat, and is powered from the aircraft electrical system. The incendiary capsules are small polystyrene vials pre-loaded with 5.5 gm. of potassium permanganate crystals, and capped with a tight fitting plastic lid. These are conveyed in a metal cabinet adjacent to the priming machine. Capsules are fed by hand into a rotary turntable on the machine. An automatic cycle processes each capsule by injecting 1.3 ml of ethylene glycol and dropping the capsule through a venturi tube out of the hull of the aircraft.

The two chemicals combine in an exothermic reaction after approx-imately 30 seconds, by which time the capsule has fallen to ground. The chemical reaction causes intense flaming and combustion of the capsule and contents. The rate of ejection of the capsules from the aircraft can be varied to suit the required overall lighting pattern but a rate of 2 seconds is common in Victoria, resulting in a line of ignition points about 5 chains apart for a flying speed of 100 mph. By flying parallel flight lines 10 chains apart, a grid pattern of one ignition point per 5 acres can be established. Under suitable conditions, a grid of fires at this spacing will slowly join together before the following morning, thus achieving the theoretical all-over burn.

The fixed-wing technique referred to in Wood's paper is illustrated in this CSIRO video, and this document (from a paper by G van Didden) provides further information about the CSIRO Incendiary Machine.

In 1978 a helicopter conducting a fuel reduction burning operation using DAIDS crashed near Wandiligong in NE Victoria and two FCV staff, Stan Gillett and Peter Collier, and the pilot, John Byrnes, were killed. The use of DAIDs was discontinued immediately and a new ignition method sought. 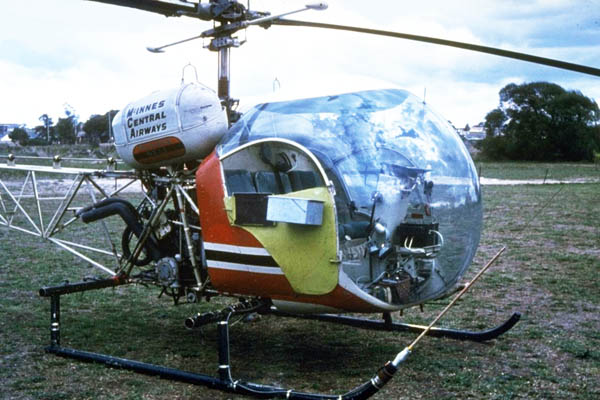 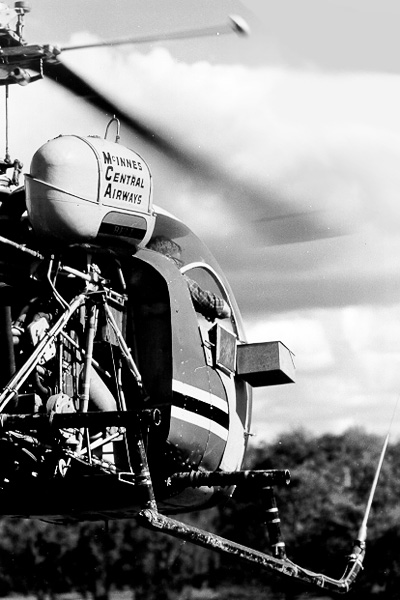 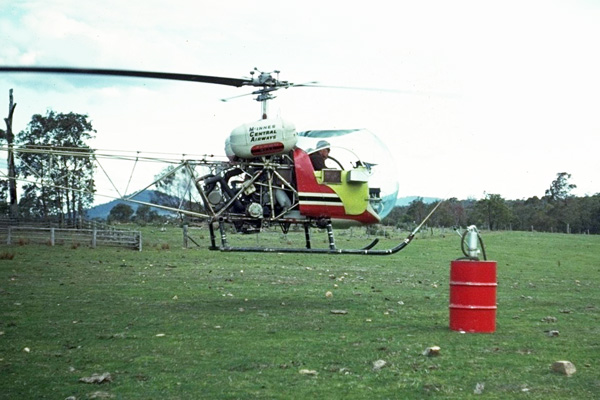 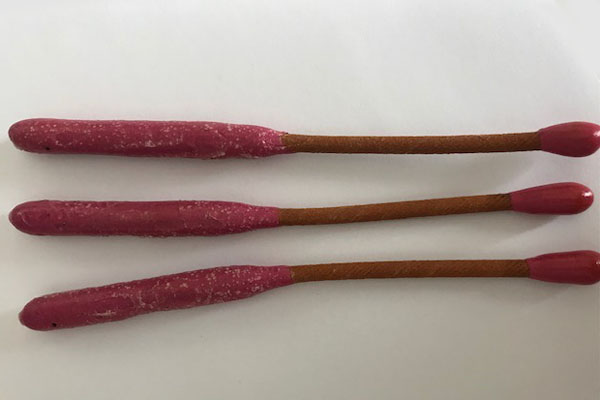 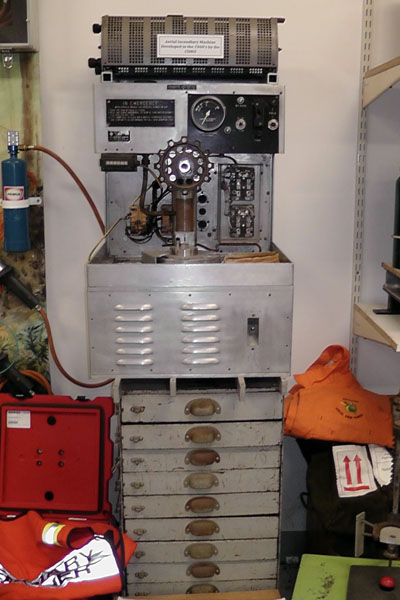 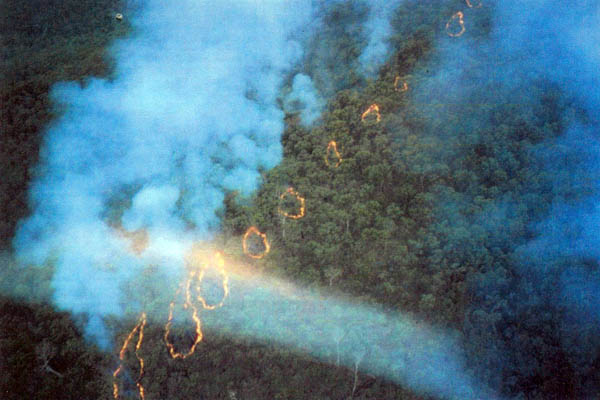 The Canadians had developed a machine that used "ping pong balls"1 instead of cylindrical capsules, and in 1977 the FCV purchased a Premo machine for evaluation.

The Premo machine used four slipper blocks, which were loaded via a hand-operated hopper which when rotated forward the balls would be fed into four feed chutes to individual slipper blocks. Each slipper block has an opening allowing individual balls to enter and exit once injected.

In its original design the machine was not suitable to meet the burning objectives and modification would be necessary.

By regulating the speed that the injected capsules are being dropped controls the amount of fire created on the ground. 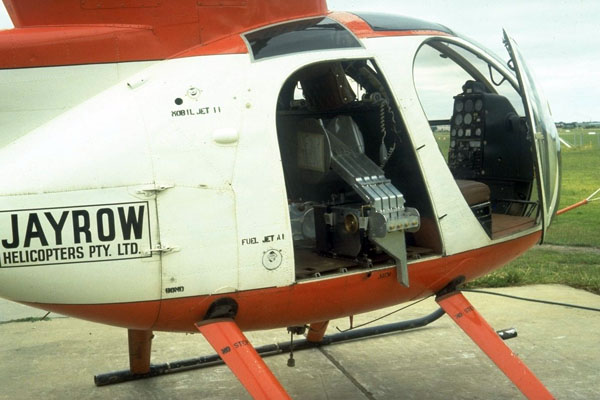 The new Aerial Ignition Machine
About 1980
Photo: B Marsden

Two Aerial Drip Torches (ADT) were built in the 1990's. Both machines were assembled and maintained by the Fire Equipment Development Centre at North Altona, and developed in conjunction with the Department of Conservation and Land Management in Western Australia.

The first was trialled during the 1991/92 autumn burning season. The machine proved to be successful and a second machine was introduced in 1998 to assist with burning operations across the State.

The ADT's were commonly used for regeneration burning.

The first ADT introduced in 1992 had a dry weight of 160kg and a capacity of 130 litres, providing about an hour of operation. Following initial use, systematic modifications were adapted including improved ignition of gel at the drop tube, installation of an air bleed valve at the pump to assist pump priming and improved mounting brackets for the CO2 bottles and propane canister attached to the machine.

The second, and lightweight ADT, introduced in 1998 had a dry weight of 68kg and a capacity of 200 litres due to a smaller lightweight frame and plastic (Polyfin) tank.

In operation the ADT is suspended below a helicopter via four strops attached to the vessel and a cable to the helicopter cargo hook. Gelled fuel is dispensed via a drop tube which is attached to the pump outlet of the machine, and ignited via a gas torch.

Safety features built into the first ADT were: 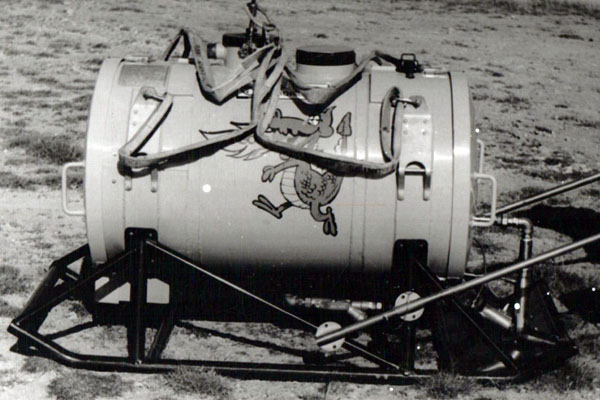 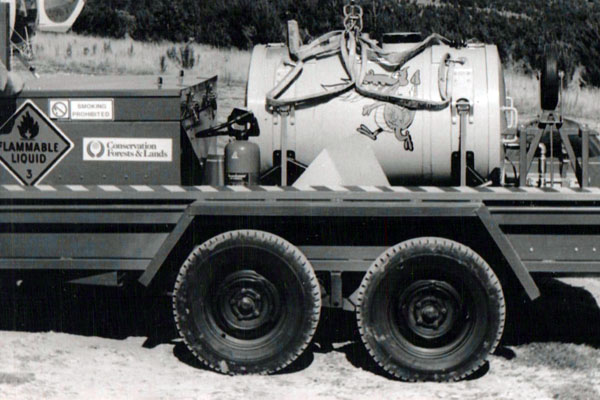 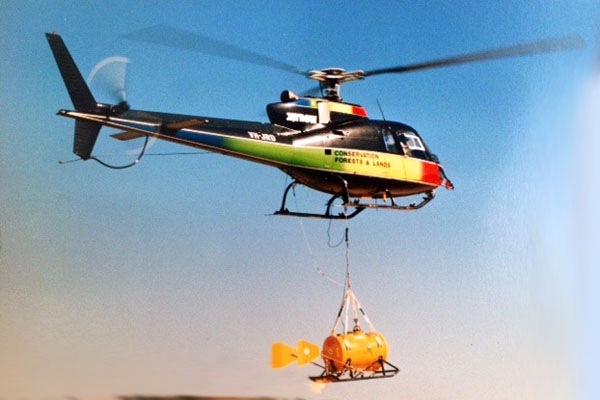 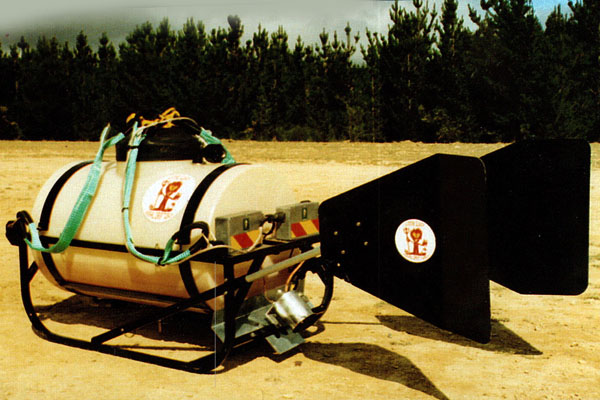 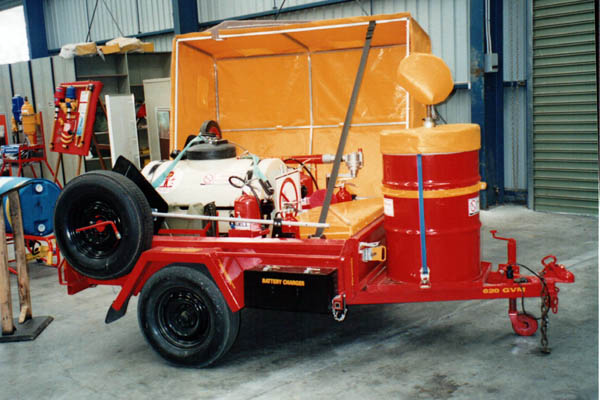 Later developments of both Aerial Ignition Machines and Aerial Drip Torches have continued to use the principles established in the first machines described in this article. Annual aerial ignition training programs were conducted under the direction of Bryan Rees, Aviation Officer.
Contact the Editor