A US business woman, Margaret Heffernan, is recorded as believing that, ‘…for good ideas and true innovation, you need human interaction, conflict, argument, (and) debate….’

Well everything has a beginning, and that includes the current day 400 litre slip-on fire-fighting module. The concept started off as a basic water cart and slowly developed into a vital firefighting tool that is, these days, fitted to every one tonne fire vehicle operated by forest fire crews across Victoria.

We will go back in time as far as history will allow and start with the common 180 gallon Furphy water cart. (Fig1) The Furphy was developed and manufactured in Shepparton, Victoria in the 1800s, and was widely used by the militia in World War 1, while being a common feature, in its day, around country farm properties.

I can recall reading about the early firefighters using the Furphy water cart to help extinguish forest fires. The water was scooped out of the tank using buckets, while beaters and tree branches were simultaneously being used to belt out fire edges. It was tough going.

The FCV owned and operated a number of Furphy water carts and similar steel cylindrical water tanks in the early days. When they were first introduced into the FCV it is hard to know, but there were still some around in the late 1960s. I can recall seeing them at the FCV’s Fire Protection Workshop at North Altona.

There were several of the slip-on version (Fig. 2), and a towable wheeled version that had been returned at some time to the site from the field. Two Furphy water tanks have since been preserved and are on display as part of the Historical Equipment Museum at the Centre.

The FCV in the 1950s, and at least until the late1960s, also used locally developed 88 gallon rubber water bladder tanks, as a slip-on, secured by ropes to each side of a long-wheelbase Land Rover tray vehicle. (Figs. 3 & 4)

In the 1960s, Land Rover 4x4 vehicles were the FCV’s main off-road works vehicle. The rubber tank, pump and rubber delivery hose, fitted with an on/off director, were assembled in the vehicle tray. When the tanks were full, the water would slosh backwards and forwards while in transit, as there were no baffles to stabilise water movement.

The laden black water bladder tanks were seen to "look like a pig's bladder", and eventually, and for a long time past the demise of these rubber tanks, a small vehicle with any type of slip-on module was known as a "Pig"

A number of accidents with these rubber tanks occurred on the fireline, particularly on tracks with steep side grades. The movement of the water sloshing and accumulating on the lower tank wall created an imbalance in the vehicle. The frayed anchor ropes, under strain due to constant rubbing on the high side wall of the vehicle, would snap, and the whole assembly of tank, pump and hose would break away from the vehicle and bounce down through the bush. That must have been some sight.

An alternative configuration was sought.

The new tanks that were introduced were those that were readily available, cost-effective and required very little modification. The early domestic steel heating oil tanks that would have been installed at the side of a house for domestic oil heaters were ideal. They were modified by attaching corner brackets so that they could lay flat on their back and be anchored to a vehicle tray floor. The tank filler consisted of a large metal socket welded to the top of the tank and fitted with an early lever action knapsack lid. (Fig. 5)

A 480 litre poly-tank complete with a milk can lid was also being trialled during this period, but dimensionally the tank was too large and the milk can lid kept popping out due to water surge within the tank. ( Fig.6)

It was in the early 1980s that the FCV Fire Equipment Centre was instructed to develop a purpose-built frame to safely support a tank and pump assembly for the then current Toyota Land Cruiser tray vehicles, that had replaced Land Rovers. It was also suggested that the frame should be constructed with rated lifting points, to enable it to become a sling-load under a helicopter should the need arise. The rated lifting points would also assist in the removal and mounting of a slip-on at Work Centres when using a block and tackle chain lift. (Figs. 7 & 8)

During the development phase of the frame a smaller, square 400 litre poly-tank with screw lid was being developed by a local company. The tanks would become the standard for all future one tonne vehicle slip-on units manufactured over the next thirty plus years, with over 2000 being produced.

As development continued the 400 litre slip-on modules were to include all the features originally requested, together with a number of enhancements. Many were purchased by other fire agencies, both in Victoria and nationally, over the following decades.

Continuing subtle changes have been made, keeping pace with firefighter needs and with improved technology. For example, the development of Class A foams led to the introduction of the Dosatron foam injector, a standard inclusion that provides accurate metering of the foaming agent into the water stream, is easy to operate, and is built directly into the water delivery line.( Fig.9)

When Compressed Air Foam became an alternative option, a compressor and control panel, with associated fittings, were included as an added feature. This allowed firefighters to experience the advantages of using compressed air foam (CAF) during blacking out operations. (Fig.10)/ 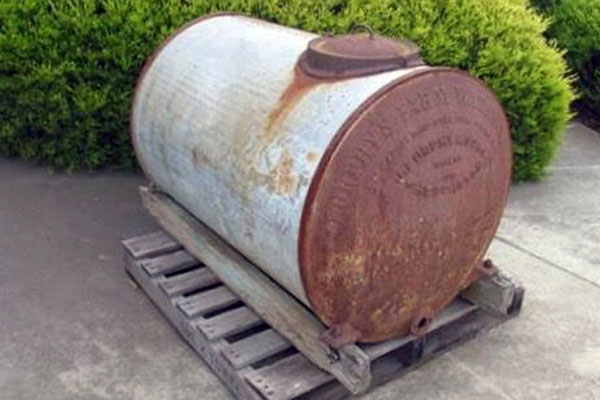 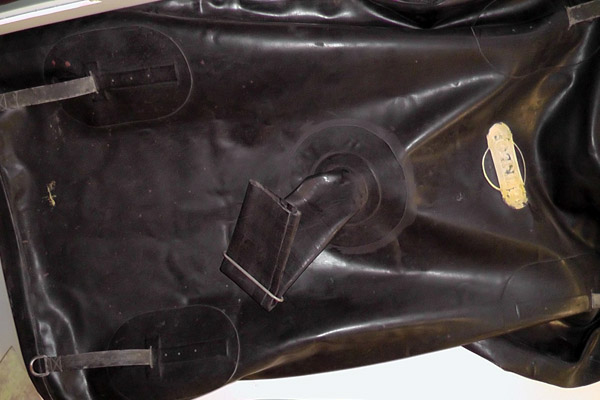 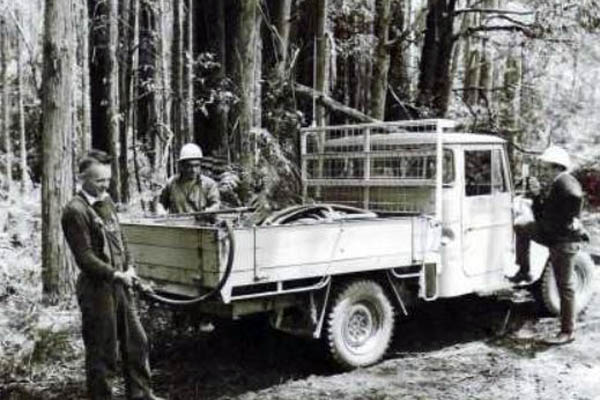 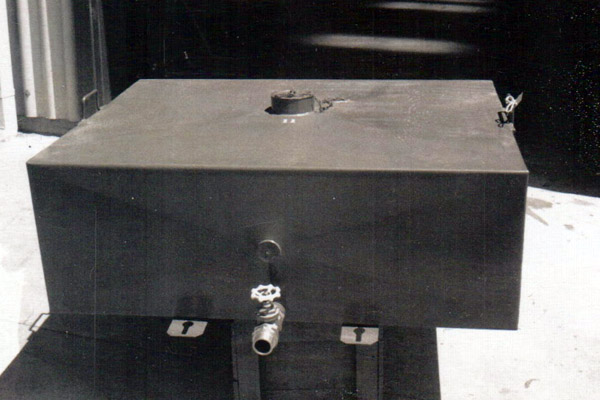 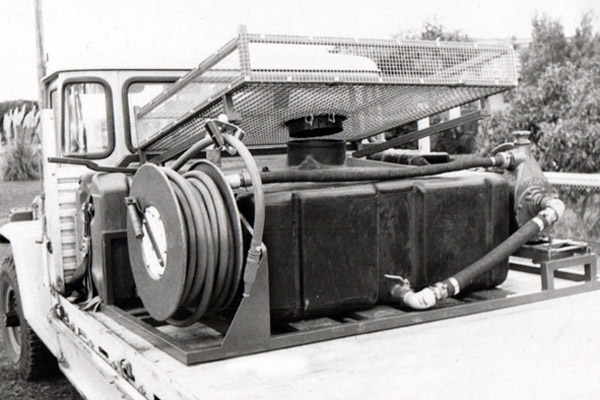 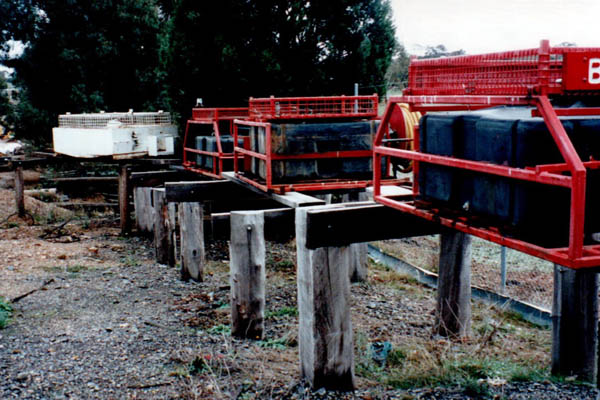 Fig. 8  Slip-on modules stored in shelter and suspended by block and tackle
1989
Photo: B Marsden 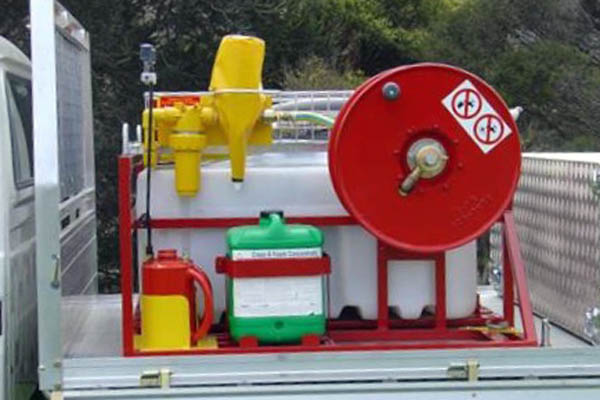 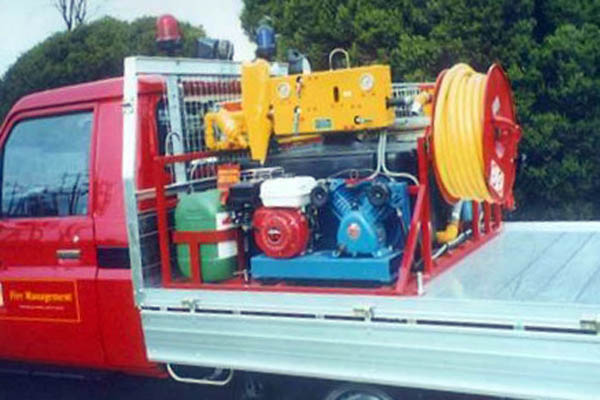 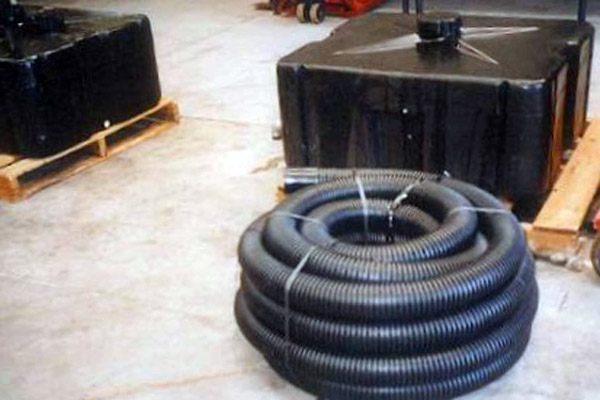 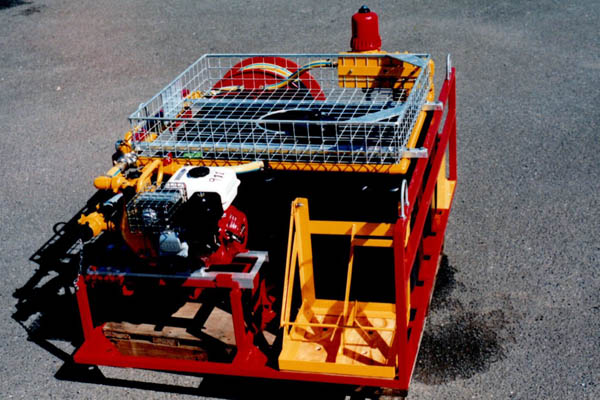 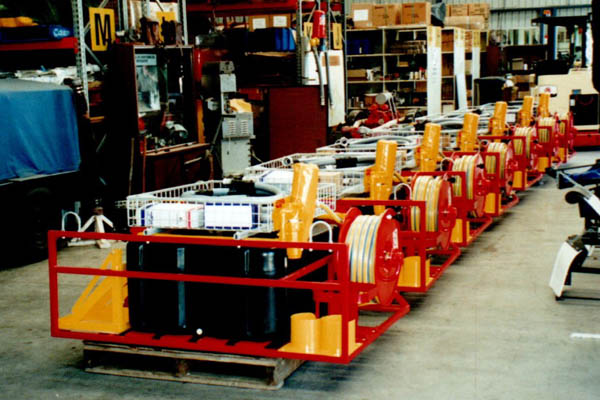 Field performance monitoring was also essential. As an example, when there was an issue with water surge in the 400 litre tanks, it was addressed by coiling a length of slotted agricultural hose inside the tanks which alleviated the problem, while still retaining the 400 litre water capacity. (Fig. 11)

The 400 litre slip-on firefighting modules have played a vital role in supporting both the mid-range and large fire tankers on the fireline, while fulfilling an important blacking-out role in their own right.

What started out as a mere water cart transporting water has, overtime, been transformed into a valuable fire-fighting tool capable of delivering straight water under pressure, aspirated foam at the nozzle, and Compressed air foam that will adhere to both vertical and to ground fuels.

We can only guess what developments in fire-fighting technology will produce over the next fifty years.