Best Use of Victoria’s Timbers

The considerable potential for Victorian native hardwoods as fine timber was recognised as early as the mid-1800’s but there was little or no inclination to develop this potential for a number of decades. The utilisation of native timbers was wasteful and the forests were extensively cleared in an uncontrolled manner. Eventually the Government established the State Forest Department in 1907 in recognition of the destruction of the forests and the growing rehabilitation liability. At this time there was also a call for the Government to support the establishment of a works to undertake research into techniques for producing seasoned timber from native hardwood species. Work commenced on the Newport Seasoning Works in 1910 with initial production in the following year.

The objectives of the seasoning works were to:

The seasoning works commenced operation at a modest scale with limited drying capacity in 1911. Kiln capacity was increased considerably to level of 1,250,000 super feet after five years. The “House” seasoning process was adopted (after the patentee Mr John House) which enabled the production of seasoned timber from green state in 2-3 weeks.

Early success occurred with developing effective drying regimes for Mountain Ash (known at the time as Victorian White Ash – Eucalyptus regnans). Drying regimes were developed for other hardwood species, but most of the production at the works was with Mountain Ash which was sold to the Public Works Department (PWD). In fact, the Government transferred control of the Works to the PWD in 1915 in recognition that most of the production would be for public works. However, this was unsuccessful and control was transferred back to the State Forests Department the following year.

The Department was active in demonstrating the effectiveness of seasoning techniques, and drawing attention to the promising market demand for seasoned Mountain Ash timber, in efforts to encourage private millers to establish their own kilns and move into processing seasoned timber. As part of these efforts, the FCV sponsored a visit by an international kiln drying expert, Mr HD Tiemann, in 1922. Mr Tiemann carried out research at the Newport works as well as seminars for sawmillers and other interested parties.

Irregular supplies of sawn timber from private millers were identified from the earliest days and restricted production from time to time. The FCV purchased a sawmill at Nayook in 1920 to ensure reliable supply of sawn timber to the Works. The Nayook mill operated for 10 years. A sawmill was also established by the FCV at Erica in 1940 to assist with the salvage operations following the devastating 1939 bush fires. Almost the entire mill’s production was supplied to the Newport Seasoning Works in the early years to help meet the increased demand for seasoned timber for the war effort and the post-work construction boom. There was less emphasis on technical research and promotion of the potential of seasoned timber enterprises during this period.

The impending reduction in supply from Mountain Ash forests in the Central Highlands was promulgated by FCV from the early 1940’s. The supply reductions were a result of forests having been heavily cut over together with losses from the 1939 fires. Increasing volumes of logs were supplied from further distant non-Mountain Ash forests as they were opened up to replace declining supplies from the Central Highlands. East Gippsland had become the primary source of logs by 1956 and supplies of Mountain Ash to mills in Healesville and Warbuton ceased in 1958. This resulted in a declining proportion of timber being seasoned by private millers and also questions about the ongoing role for Newport Seasoning Works. The Works finally closed in 1956 amid controversy about financial controls.

Sawmillers were initially slow to install kilns and move into the seasoned timber business. The first private kiln was installed in 1917 with a trickle of new units in the following years. However, sawmillers did respond more readily over time such that there were 173 kiln units over 44 plants by 1939. This was partly driven by the FCV’s efforts, including providing technical details of drying schedules to sawmillers. Also increasing demand for seasoned timber supported the move into seasoned timber business. The market for local seasoned timber was given a lift by the imposition of increased tariffs on imported Californian Redwood, Oregon and Baltic Pine as a result of efforts by the Victorian Hardwood Sawmillers Association.

The expansion was based pretty much exclusively on Mountain Ash despite Newport’s successful trials with other hardwood species.

The production performance of the works was generally good after a slow startup period. Sales revenue demonstrates the pattern of performance. The sales revenue is shown in Figure 1. Activity remained quite low for the first three decades and rapidly increased from 1943 until 1955, the year before the works closed. The average annual sales revenue from 1911-1942 was just £10,233 and this increased to £54,766 from 1943-1954. The increase was driven by the need to provide timber to the PWD for the World War II effort and for the post-war construction boom. It is also noted that sales to PWD were internal Government transfers and did not occur through a competitive market. The sales prices relative to market prices at the time are not known.

Whilst profit maximisation was expressly not the objective, the works were expected to be financially viable. The accumulated profit over 44 years was a little more than £13,000 which is an estimated 1-2 % return on invested funds. This also covered the research and development costs. The cumulative profit is shown in Figure 2. 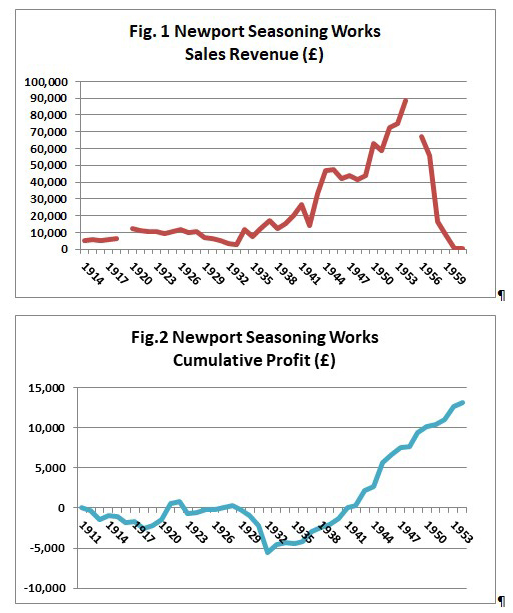 Was the venture successful? It seems so.

Millers were slow to take up the opportunity of establishing a seasoned timber business but eventually many Mountain Ash sawmillers converted from just producing green timber to further processing into seasoned timber. There was a good demand for select seasoned Mountain Ash timber for various uses including furniture, joinery, flooring, linings and weatherboards. However, even though effective seasoning regimes were developed for Victorian species other than Mountain Ash, there was very little private production of seasoned timber of these other species.

The Newport Seasoning Works took some time to reach profitability on a consistent basis but it became quite profitable in the latter decades of operations. Overall the estimated return on investment of 1-2 per cent was consistent with the objective of ensuring financial viability. The financial return included the costs of research and development projects.

The Government’s primary objective was to provide maximum benefit to the State through ensuring the best use of Victorian hardwood species by encouraging further processing of green sawn timber into seasoned timber. This is a common natural resource use policy of Australian States and the Federal Government as well as other countries. It remains an ongoing relevant topic currently with Australia’s mineral resources. Some contend that further processing of resources should occur locally to provide additional employment and economic benefits to the country. However, private enterprises engaged in the processing of the resources do not always share the same objectives. The primary aim of the private companies is to make a profit from its endeavours.

The differing objectives are timeless and full benefit flows to the State and the private enterprise only in rare instances when they are coincident. In most situations the State benefits from maximum processing are compromised by the private enterprises profit objective. There was reasonable level of coincidence in the respective objectives of the State and a number of Mountain Ash sawmillers during the 1940’s and first half of the 1950’s decade. During that time a considerable proportion of Mountain Ash logs were used to produce seasoned timber in profitable enterprises which were also employing larger numbers in more advanced processing mills. Further economic benefit flowed from the reduced demand for imported timber that was supplied by locally produced seasoned timber. However, the situation was not ongoing. The exhaustion of the Mountain Ash resource from the mid-1950’s and the lack of successful enterprises based on other hardwood species resulted in the locally produced seasoned timber declining substantially for some decades.

The Newport Seasoning Works was established in 1911 to achieve the Government policy of ensuring the best use of Victorian hardwood species to provide maximum benefit to the State. Newport was ultimately successful at developing effective timber seasoning schedules and encouraging private millers moving into seasoned timber businesses, particularly for Mountain Ash seasoned timber. The works were also financially viable over the life of operations even though they were not profitable for the first half of the life of the works.

Efforts to meet demand for timber for public works during World War II and for the post-war construction boom changed the emphasis. There was less research and development effort and more production attention to meet increasing demand.

The lack of development of private enterprises for seasoned timber of other hardwood species and exhaustion of the Mountain Ash resource from the mid-1950’s raised questions about the ongoing role for Newport which finally ceased operations in 1956 amid controversy about financial controls.

The enterprise was successful overall for four decades in meeting the objectives of ensuring best use of Victorian hardwood species and operating the works on a financial viable basis. Effective seasoning schedules were developed and private millers were encouraged to move into processing green timber into seasoned timber, particularly for Mountain Ash.

The lack of development of private seasoned timber enterprises for other species and the exhaustion of the Mountain Ash resource resulted in a substantial decline in timber seasoning of local species from the late 1950’s. The Government re-visited the policy in 1986 with the TIS. Quality logs were allocated based on the level of value added processing, long term licences were issued to support increased capital investment required for seasoned timber businesses and a log quality grading system was implemented to allow direction of log quality to value added processors. However, not all businesses successfully converted from green sawmilling to further processing into seasoned timber.