An Edited Extract from a Report by AG McArthur 1

"Five men were killed and 17 people injured as 100 kilometre-an-hour winds drove 69 fires statewide, 11 of them major blazes in the Western District. A total of 81 houses were destroyed and 130,000 hectares of grazing land burnt out." 2

Most fires were outside forest areas, but the fire that started near Glengower eventually burnt the backside of the VSF, passing down the eastern flank of the School and destroying a significant area of softwood plantation.

"While Forest Commission Chair, Dr Frank Moulds, was devastated by the loss of 1821 hectares of prime timber plantations (at Creswick), he praised the 'magnificent courage' shown by firefighters. 'The cooperation from the Country Fire Authority was first rate,' he said." 2

On the 12th February 1977, 69 fires were reported throughout Victoria. Mr. Alan McArthur and his Assistant, WB Roberts, conducted a survey concentrating on the rate of spread and behaviour of the eleven major fires which occurred in the Western District of Victoria on 12 February and the effect of these factors on suppression tactics.

Most of the fires appeared to have occurred through transmission line failures brought on by the very strong winds which averaged 50–55 km/h preceding the cold front. Only eleven fires burnt more than 1000 ha and, of these, only three burnt more than 10,000 ha. The gross area burnt by the eleven fires was 116,940 ha. The cost of the damage from the fires was an estimated $20 million.

The survey was carried out during the period 17-20 February, and again on 11-13 March 1977 when some aspects of fire behaviour which were missed in the original survey were picked up and other points clarified. The following is a transcript relating specifically to the Glengower-Creswick fire.

The fire started at 1320 hrs approximately three kilometers southwest of Glengower on the edge of the Campbelltown-Clunes road. It is understood the fire was caused by human agency and it may have been deliberately lit.

This was the only major fire on 12 February which started prior to maximum wind speeds being recorded. As a result of this, the fire started relatively slowly, but the rate of spread increased dramatically after two hours when wind speeds rose to 50-55 km/h.

In the first hour, the headfire travelled 3.5 km and passed between Leishman Hill and Kelly Hill. At the end of the second hour, it had travelled a further 6.0 km and had passed over Clover Hill and was approaching Birch Creek. A little prior to 1500 hrs, the wind speed had picked up and by 1525 hrs (ie. 2 hours after the start) was around 50-55km/h. At 1535 hrs, a spot fire was detected south of Birch Creek, having been thrown around four kilometers ahead of the main fire. To add further to suppression difficulty, a further spot fire was detected 3.5 km west of Allendale and six kilometers or so south of the main front. The head from this spotfire drove straight into North Creswick and the pine plantations immediately to the northeast of Creswick and extended further to the south/southeast in timbered country.

The fire reached the outskirts of Creswick a little less than three hours after the start (1615 hrs) whilst wind speed was still around 50 km/h and moved into forest land which was the responsibility of the Forests Commission. During this third hour, the fire had travelled close on 10 km.

Although wind speed was starting to decrease slowly, spread through the forested country was quite rapid and averaged around 5.0 km/h for the two hours it was burning in this type of country. The change reached the fire area at 1830 hours and it stands to the credit of rural brigades, the Country Fire Authority and the Forests Commission that this was the only larger fire on 12 February which did not break away on a broad front to the northeast with the frontal passage. As far as could be ascertained, only one or two minor breakaways occurred and no more than a further 600 ha were burnt after the change, representing only a 10 per cent area increase.

The fire was long and narrow, having travelled 29.7 km and was generally less than 3 km wide, giving the excellent length to breadth ratio of 10:1. The forward spread was halted three kilometers southwest of Wattle Flat and six kilometers southeast of Creswick. 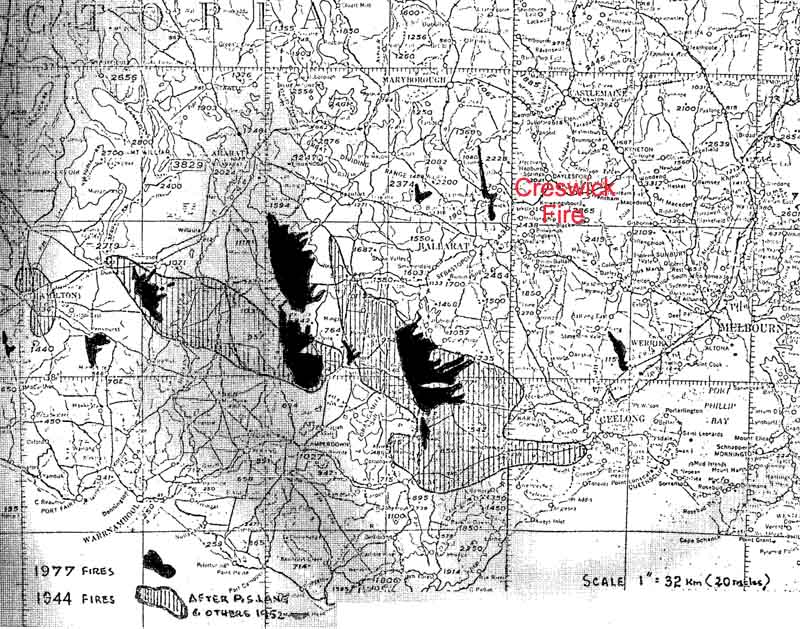 Pastures were lighter on this fire than on either the Streatham, Pura Pura, Cressy or Strathmore fires. The country is basically savannah woodland with scattered timber and a lot of improved pasture land. Sharp grassy hills dot the landscape and the long distance spotting which occurred between 1515 and 1545 hours may have occurred from these hills. A lot of gorse occurs along the roadways and this may also have provided a source of spotfires. The headfire run in the grassland did not appear to be anywhere near the intensity of the other big fires on this day and flame heights appear to have ranged between 5-10m. Even in the timbered country after 1600 hours, crownfire formation was rare, although scorch heights reached 30-40m.

Little is known of suppression tactics, but the shape of the fire suggests they were well handled. Under normal circumstances, the fire would have been halted at Birch Creek, a distance of 10 km from the origin and two hours after the start, burning an area of 1000 ha or less. The two long distance spot fires which occurred at 1535 and 1545 upset the concentration of suppression forces, and when combined with the dramatic increase in wind speed at this time, gave little chance of preventing the fire reaching forested land in the vicinity of Creswick.

In all, the fire travelled 28.8 km and never exceeded a width of 3 km. It was the only fire on 12 February which did not give a substantial breakaway after the southwesterly change. Rate of spread during the first hour was 3.6 km/h and 6.1 km/h during the second hour. During the third hour, spread rose to 15.7 km/h under the influence of 50-55 km/h winds and fairly long distance spotting. During the next two hours (1600-1800), the fire spread at a rate of 5.4 km/h through forested country.