This article first appeared in the Newsletter of the Australian Forest History Society, Issue 43, April 2006

Thomas Derham Bailes arrived at Beaufort, Victoria, in 1899 to take up the post of Forester for the Mount Cole Reserve. He stayed for thirty-eight years in his official capacity and, like most foresters, displayed a passion for protecting the forests under his care from foolish and wasteful exploitation. While we do not know whether or not he was formally trained as a forester, he appears to have had a solid grasp of all the practical principles of forestry, and was a fine example of that class of unsung heroes so aptly named ‘public servants’. In response to an application by sawmiller James Emery for a site at Mount Cole in 1925, Bailes rose to the defence of his forests in an impassioned letter to AV Galbraith, a newly appointed member of the three-man Forests Commission of Victoria. This letter amply demonstrates some of the conflicts between conservation and utilisation at the level of an early twentieth century forester in the field.

"Arriving here in ’99, I was inexperienced in the millers’ ways and recommended areas containing a high percentage of large mature timbers, termed ‘culls’, left standing by previous millers and splitters, believing the majority would be felled and worked-up, but I was not long in learning that the cull timber was only an excuse for entry and that it was mainly the young growing immature trees (handy log size) of 2ft. and barely 2 ft. diameter, that was chiefly operated on, with barrel of 60 ft. and 80 ft. in length, of which up to 20 and 25 ft. was removed to the mill and worked up. In consequence I obtained a rise of 6 inches (though I asked for 12 inches) in the legal cutting diameter (a big thing in those days) as the [Forests] branch was at the mercy of every politician and with neither a soul to be hanged or a body to be kicked, with the result that today stands, I believe, one of the finest reproducted [sic] young forests in the state.

The applicant [Emery] was one of the millers in those days, and not by a long chalk has that tendency left him; as long as such unmatured well-advanced pile trees (which are again looking up in the reserve) are dotted throughout, so will he have that tendency to become established. Emery has been notified more than once that the main portion of the Mount Cole State Forest west of the Raglan Road is closed against milling. On the area now applied for within the Marney’s [sic] improved belt, and after repeated caution, Emery’s men felled a number of splendid messmate pile trees about 20 inches in diameter and of over 60 ft. of clean straight barrels, which I found in his log yard converted into 20 and 25 ft. lengths (butts of trees only). This occurred in 1905 with the result that he was refused a further licence. On account of the scarcity of timber he set up a mill in Long Gully on the south fall of Landsborough Hill, Tchirree State Forest. 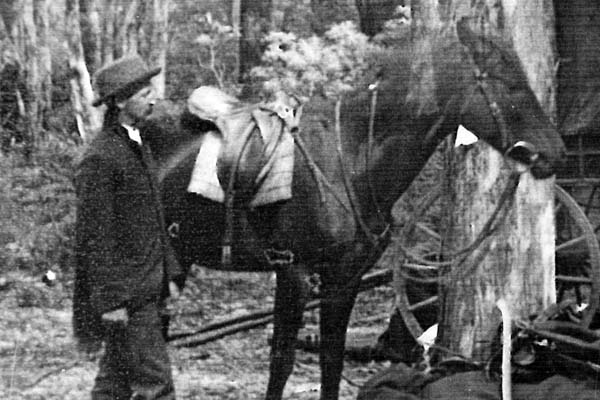 The growth of timber trees in the Mount Cole Reserve is somewhat different to that of the Pyrenees and other similar forests, resembling much after that of the Wombat in the vicinity of Sardine Creek. The growth is quicker and reaches much higher diameters, and even at 2 ft. 6 in. is far from matured. The cutting diameter, on a general basis, should not be less than 3 ft. 6 in., but this would, if adopted, mean a much longer wait. I consider a general fixture to meet any necessary requirements should be 3 ft. diameter 2 ft. from the surface of the ground. There appears to be a dearth of timber supplies about Beaufort, supplies coming from Gembrook and I believe Cape Otway. I ascertained from one of the firm of the main timber yards here, the reason why his supply or requirements were not obtained from Emery. The reply he gave me was ‘They gave one order and one only, and that when supplied was found, after being in the yard for a short time, would turn round and look at you, and that lengths of up to 16 ft. only could be obtained, whereas the Gembrook messmate timber was cut from matured trees and supplied in 20 and 25 ft. lengths’.

There is no area within the Mount Cole reserve to suit Mr. Emery’s requires [sic], but at Mount Lonarch, adjoining his present logging area to the north, and with a spur between, known as the School Ridge, there is a logging area which was reserved for him. Holloway of Avoca, and another miller, lodged applications for this area but were refused on the grounds that there was not sufficient timber for other than the established millers. This area is the only remaining portion of the east fall of Mount Lonarch not cut over, and contains some 100,000 super feet. … Emery’s plea is that it [the area] would not pay him as the face and grades are too steep to shift.

There is a logging area within the Mount Mistake Forest, parish of Colvinsby, where approximately at least 500,000 super feet, chiefly millable messmate is obtainable, chiefly near the summit on the east fall, and which would require a fair amount of haulage by wire rope. James Emery’s plea is that it is too costly - and the loading station lies within [just] five miles (two for choice – Buangor or Dabris) on the main line!

Presuming there was sufficient matured milling timber on the site applied for to warrant a mill being established there, there is the fact that the position of operations is situated in the north west portion of the reserve, the most dangerous corner as far as fire is concerned. Once fire started in the locality, it would sweep up the semi-circle of [the] range, travelling through belts of young timber in pile, spar and pole stage and over table land, before anything like a check could be made. Fires in the past have burnt up the lighter debris and charred the heavier debris of bygone milling days; at present damage has been reduced to normal.

No privately-owned sawmill should ever again be permitted within the boundary of the reserve. Trees should be felled and converted into logs by our own [Forests Commission] men and sold ‘in the round’ for removal outside the reserve, or to a State Mill when the time is ripe.

At present there appears to be no real scarcity of timber. Supplies come locally or from other parts. Mount Cole Reserve should be held in reserve to meet the growing demands and needs in the near future of the northern and north western plains. The time is too early for opening up the reserve. What matured trees are standing there will not deteriorate to any great extent for the waiting. Fire is the only dread and in the meantime surveying of the area into blocks and a working plan set out with a permanent system of fire precaution should be carried out. The present ruling rate (royalty) charged for timber in this district is too low. Emery started in the Lonarch practically on his uppers, and I feel sure he will have no just cause for want in his declining days. He has no son to follow in his footsteps as a miller. The refusing of the sight [sic] will not inflict undue hardship. Please find sketch herewith showing rough position of area and locality in question.

Tom Bailes got his wish. The Mount Cole reserve remained closed to sawmilling, especially to the ‘wretched tinpot spot mills’ Bailes so despised. The Forests Commission used Emery as a mobile scavenging machine, limiting him to areas of over-mature forest around the fringes of the reserve and sending him broke in the process. When most of the mature Ash forests in Victoria were devastated by the 1939 bushfires, Mount Cole remained a green oasis and was one of the few sources of clean, green timber for some years. As Bailes predicted, once the reserve was re-opened after the Second World War, logs were removed to mills in Beaufort and Ararat, leaving Mount Cole as an archaeological time capsule of 19th century sawmilling. After his retirement, Tom Bailes remained in Beaufort until 1950. He died the following year at the age of eighty and is buried in the Beaufort Cemetery.