Radios I Have Known

My hands-on knowledge of the FCV's radios started in 1964 when I used to hang around the Radio Lab scrounging stuff to use in my Ham radio pass-time and ended up as the clerical do-everything bloke in Fire Pro [Fire Protection Branch - ed] in 1967, including operating VL3AA (and still spending more time in the Radio Lab than at my desk in Fire Pro). In 1972 I moved to Stawell as an ‘in-house’ technician.

I can still remember when I was in Fire Pro, ordering the big 75-volt and 150-volt dry batteries for the RC16B and TRP-1 radios and sending them out to the Districts, before the FP-1 finally made them obsolete, even in Mildura. I also remember collecting a heap of these two radios from the field (in the districts where the FP-1 had at this stage just replaced them) to send gratis to Tasmania in the wake of their disastrous and deadly 1967 bushfires, as they had no viable radio system at the time (they had had no big bushfires for a wake-up call like our 1939 fires).

The hand-held units first used in the field were Japanese-manufactured 27MHz walkie talkies, powered by the first generation of NiCd rechargeable batteries. From memory they were called ‘Electrodyne’. Marginally better than nothing, with an effective range of half a kilometre at best, they started out as a 100-milliwatt output but the Commission had them tweaked up to half-a-watt. I took a couple of them to Delegate on a fishing trip in 1966 but the mate and I could wave to each other further than the radios would go! (One of their chargers is still working to this day. Not bad for a 50+ year-old unit.) 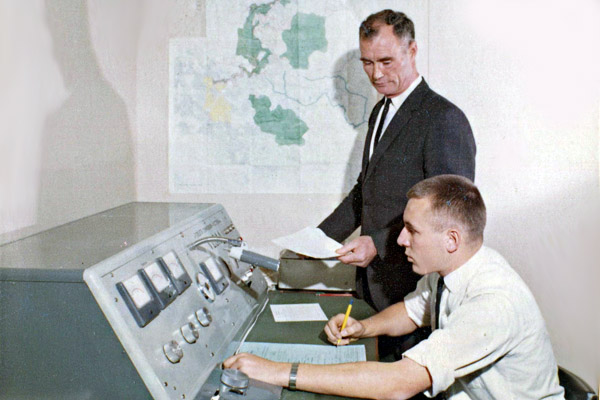 A bit later another portable 27MHz Japanese, ‘almost’ walkie-talkie, came into use. Called ‘Pony’ it was a 1-watt radio, powered by D-cell batteries and was carried slung over a shoulder with a coiled microphone. Again, it was only marginally useful. To put its output power in context, modern hand-held radios the size of a cigarette packet put out 5 watts.

The first truly effective handheld portable that the Commission used was a PYE 10-8.  (Even though it bore the PYE label it was made in America and I have seen the same radio with different badging.) While a bit bulky by today’s standards it was a full 5 watts, operated on the FCV VHF frequencies instead of 27MHz and used modern second-generation NICd batteries. It was very extensively used in all sorts of applications.

The Forest Officer’s vehicles had either ‘Seafarers’ or the larger and relatively more powerful AWA ‘Teleradio’ 60A or 60B. The Seafarer incorporated a very sensitive AM broadcast receiver which could be used to listen to weather forecasts on local radio (and the Melbourne Cup if you were stuck out in the bush on that November day) as normal car radios would struggle to find a signal in remote districts like Orbost.

Two further vehicle-mounted radios that saw service in the ‘60s and early ‘70s were the HARBROS (manufactured by Harding Brothers somewhere around Shepparton from memory) and the McLeod radio, manufactured by McLeod Electric in Derrinallum. Both these radios were far smaller than the AWA mobiles and were quite primitive all-valve units with relatively low power output. I still remember servicing them in my first stint at Stawell from 1972 to 1974 as the north and northwest were a bit of a backwater in relation to radio quality. Neither of these mobiles approached the Teleradio, Seafarer or FP-1 for performance but then they were probably a fraction of the price.