"It will be evident from the above egocentric saga that my time at the VSF was, in many ways, pivotal in a serendipitous and opportunistic career. It was a unique experience, worthwhile in so many ways, in a unique place."

Alan forwarded this paper to the FCRPA some time ago.

Like so many of the post-WWII era, I sold my soul to the Victorian State Education Department, agreeing to teach for three years, in return for an otherwise unaffordable university education – in my case BSc, DipEd at the University of Melbourne, under the guidance of the Secondary Teachers’ College. By the second year it became apparent that the latter had fairly firm views about the nature and content of courses deemed appropriate for a budding teacher – by-and-large broad and general arrays of subjects done in insufficient depth to fit one for anything else afterward.

Alan H. White was enjoying his chemistry at the end of second year, taken in combination with physics and maths, and desirous of pursuing it through a full third year. “Not so” said Alice Hoy, the principal of the STC, a diminutive silver-haired figure who might have been someone’s grandmother were it not for those icy blue eyes and will of steel. “We’d rather you did this, this and this – go away and think about it for a week.” After a week, AHW presented again, still thinking he’d like to do chemistry ‘properly’, so he got sent away for another week’s reflection .. and so on .. eventually prevailing, probably a Good and Useful Thing for all, as it turned out.

After a few weeks’ teaching at Melbourne Boys’ High School, as a naïve barely twenty-one-year-old, I was summoned one Friday by my first boss, Bill Woodfull: “I’ve just had a call from the Department – apparently someone is seconded to teach chemistry and physics at the Victorian School of Forestry; the incumbent has been promoted to inspector. They seem to think you may be appropriately qualified - be there on Monday.” So I was.

I was met at Ballarat station by the microbus and Athol Hodgson (I think?) and transported to a place which had not previously registered on my consciousness. The Principal, Billo, a wiry and good-natured Scot, clinging tenaciously to an accent probably horribly corrupted by many years in Oz, gave an amiably gruff welcome, probably with unspoken thoughts about the replacement of a WWII veteran (Don Neale), by a callow and immature young prat, who might well have been another of his family of students, and, indeed, younger than some. Indeed: it was a surprise to encounter among the latter, a past associate from Melbourne University and two old comrades from my National Service platoon. The first evening was also surprising, temporary accommodation being cobbled in the (gardener’s?) hut up among the trees in the blackness and to hop into bed, to be greeted half-an-hour later with the first of a series of great thumps on the roof. Welcoming students? No, possums. 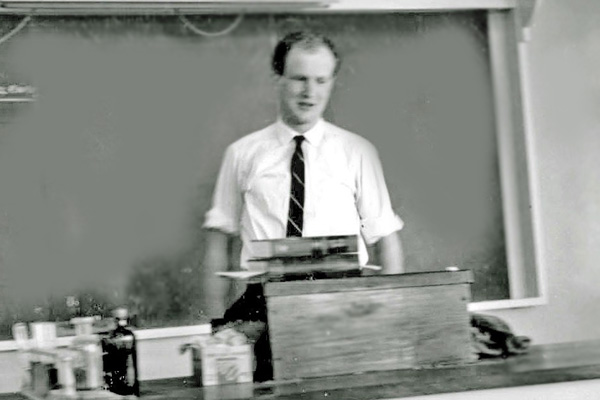 Don Neale was on the point of departure, so the requirement was to get stuck in (at the deep end) immediately – three lectures per week plus an afternoon lab class for each of first-year chemistry and physics, and a bit more for second-year chemistry, plus evening supervision, over the school year. Something of a culture shock after a load primarily comprising form 3F general science and maths a week earlier. Well, there’s nothing like having to teach a subject to make you learn it, particularly when the recipients are sharp and focussed and well-equipped to spot inadequacies, and I had to try and learn and get ahead of the game – fast.Class sizes, usually about a dozen, were pretty-well ideal, and the general atmosphere amiable and hospitable (a bit less so, as the end of term approached?) so, somehow, all survived and it all seemed to work and come out tolerably acceptable in the end. I lived in at the school, initially travelling back to Melbourne at weekends, returning late on Sunday night on the Mildura train - a crisp, freezing march under a blazing canopy of stars in the middle of winter, and eventually got a licence (the obligatory training was backing around Lake Calembeen), and then a car. After that trips home became less frequent as other venues and activities began to be explored. To Melbourne on Friday night not infrequently was achieved through impenetrable fog beyond Bacchus Marsh, with the window open so as to discern the central markings on the road, with returns early on Monday mornings occasionally accompanied by snow-covered vistas from Bacchus Marsh onwards.

All of that rather spoiled me for any thoughts of a return to more conventional school-teaching. First-year chemistry and physics were taught to first-year university standard, and examined thus by staff members from Melbourne University - Alan Buchanan, Head of Chemistry, in the case of that subject. Connections with Melbourne chemistry were re-established via a vacation research project with him and, when my three years were up, and I wondered what to do next, he pointed out that the sciences were expanding rapidly in the post-Sputnik era, Melbourne chemistry was getting new staff, and so… So, I returned to do Honours (getting a first, which would/could never have happened when I was four years younger) and then a PhD. In the course of the latter, I managed the Inorganic component of one of the mainstream first-year classes, on the strength of my Creswick experience and, in the latter years, familiar faces began to appear at my door as VSF graduates began to extend their qualifications to degree level. Toward the end, when I was trying to organize a post-doctoral position overseas, one of my previous third-year colleagues who, not being bonded, had gone overseas to do a PhD, turned up during the vacation from UWA where he had just taken up an appointment, proclaiming that there were jobs there – was I interested? Was I indeed?

Noel Bayliss, Head of UWA Chemistry, interviewed me soon after; staff had just left to take up positions elsewhere, so someone was needed who was ready to teach first year in a couple of months time – did I think I could I do it? So, around April 1, 1966, I appeared at UWA with a new job (and a new wife), which terminated by my retirement in August 2007.

It will be evident from the above egocentric saga that my time at the VSF was, in many ways, pivotal in a serendipitous and opportunistic career. It was a unique experience, worthwhile in so many ways, in a unique place. It seems that it has now gone the way of so many other centres of learning, that have had to become Businesses in more recent times, with education a commodity, and it’s great that an effort is being made to record its history before that passes into oblivion.

Other facets of life at/after the VSF that some may enquire of:

(a) Cars. After VSF I had few that were ‘interesting’ until 1989 when, with the kids wanting to learn to drive, we bought two 1981 Volvos – a manual sedan and an automatic wagon (yes, they were quite unappreciated.). Jan’s wagon got cleaned up by a truck last year (no one in it), but my sedan is still original and going strong with 460k on the clock. During the seventies and eighties, a small Corolla wagon did notable service, on half-a-dozen trans-Nullarbor expeditions, bursting with research students going to ‘Eastern-states’ conferences.

(b) Music. I continued studies on the organ during PhD; later on, becoming decrepit, I renovated by doing a performance honours degree part-time through the 80’s (having a good electronic instrument at home), at the end of which I served a five-year term as UWA ceremonial organist

(a,b) The Fire, and The Man In The White Hat – others closer to the action will surely comment on these.

(c) During the initial months at VSF, my room was in the main building, under the stairs. The furnishings were old and, one day, exploring on top of the large, tall wardrobe, I found the top half of a skull, with a hole in the middle of it. Billo was unperturbed: “Nnyup, that’s Adelaide Beck.” Soon afterwards, having dinner with the local president of the teacher’s union at Kooroocheang, I mentioned this, and he also said “Oh, yes.” We went and consulted the school records where Adelaide and brother Benny(?) were recorded as (not-very-bright) students long ago. Apparently, later in life, one night Benny smote Adelaide with an axe(?) and threw her in a local dam; the skull had been evidence at the trial. I never got a satisfactory explanation as to how it finished up in the VSF (Teddo, perhaps?). Where is it today, I wonder?

(d) In those early days, the chem. lab had the most convenient source of hot water for shaving, which I used every morning. There was a large yellow gum by the entrance, and one morning, in a high wind, I stopped short to turn back, finding I had forgotten my keys. Crunch came a large branch, down across the entrance.

(e) April 1, 19xx. Arriving for the 9.00 chem. lecture, I was bemused to find the blackboard covered completely with white chalk. Addressing the problem with the duster resulted in a series of coloured stripes consequent on pieces of coloured chalk embedded in its cracks. After their removal, cleaning of the board left a residue of a naked female, apparently rendered more permanent by the use of chalk soaked in sugar. A piece of damp cloth was required and, so, on grasping the tap, it was found to be coated in honey and the liquid that subsequently issued forth was coloured with permanganate. All in the space of about thirty seconds. Having finally got the board clean, the available chalk collapsed, having been bored out. The lecture was to be on alcohols, so retribution came conveniently via a slight extension to include thiols, complete with demonstration.

(f) Getting up to speed on all fronts properly took time. In the physics lab was an experiment involving the determination of the thermal conductivity of a metal bar inaccessibly embedded in an insulating wooden box, which proclaimed ‘Cu’. Student after student dutifully produced results adequately consistent with that, but occasionally some miscreant would produce a result which was about half the value expected, with no apparent explanation. One day, having finally made time to pick over some of the relics bequeathed by my predecessor in the office, I contemplated a notebook summarizing previous generations’ experimental results and his comments … the bar was aluminium!