Pricing sawlogs made available by the FCV involved two processes

The Royalty Equation System (RES) was introduced for the latter component of pricing hardwood sawlogs in 1950, and is the main subject of this article. The evolution of pricing systems is covered in this separate article.

The RES was based on factors designed to ‘equalise’ the costs of selling sawn timber on nominated key markets by allowing for differences in the value of sawn timber produced from different logs, the costs of transporting logs from the forest to a nominated point for conversion, and transporting the sawn timber to the market. The calculation of royalties started with the Standard Mill Formula (SMF) which was the nominal mill door price for ‘scantling grade’ timber. This was adjusted to allow for the differences in the value of timber produced from different types of logs, and the transport costs of putting the timber on the assumed key markets. The ‘divergence’ factor in the equation estimated the difference in the value of timber produced from the types of logs from base of ‘scantling grade’. It involved estimating the proportion of the different grades of timber outturn, and the difference in value of the grades from ‘scantling grade’. The transport of sawn timber to the key market, mostly Melbourne, was adjusted by applying an allowance rate to the haulage distance from the point of royalty determination to the market. This produced an adjustment for the sawn timber volume which was then converted to log volume by multiplying by the sawn timber recovery rate. The log haul was then allowed for by considering the log haul distance over different road classes and applying a haul roading rate for each road class. Lastly a residue allowance was applied to provide for the revenue from selling the residues from sawmill processing. Other allowances were also applied for special circumstances where additional costs or reduced productivity occurred.

RES was designed for the circumstances of the time. It removed the cost disadvantage for sawmillers obtaining logs from remote forests. This encouraged the opening up of forests more distant from Melbourne to assist in supplying the large increase in demand for timber to support the post-World War II housing boom. The system was extended to apply to red gum and softwood sawlogs.

The Royalty Equation System (RES) was used for pricing logs supplied by the FCV for more than four decades. The RES was resilient and long lasting. It was introduced in 1950, and was largely unchanged for more than three decades. The Victorian Government confirmed the application of RES in 1986 (TIS, 1986).

The aim of RES was to ‘equalise’ the cost of getting sawn timber to key markets to ensure royalties were equitable to sawmillers. The total of the royalty and transport costs of selling base grade sawn timber on defined key markets was to be the same for operations accessible to that market. The RES was not a full residual stumpage price. It did not appraise stumpage as a residual after all production costs had been subtracted.

The absolute level of royalty was set by applying a simple percentage increase to the existing level. This percentage was determined in an annual review considering a number of factors including:

The movement of these factors over the previous five years was reviewed to determine a percentage increase for the year ahead which would provide the desired revenue and relate to the prevailing market conditions. In earlier days, this figure was endorsed by the Minister of the day and applied. During the 1980’s, the percentage increases were set within the Government’s fee and charges guidelines, leading to increases generally below CPI increases. However, this approach had shortcomings. There was a need by licensees to have royalties set prior to the commencement of the financial year, which was well in advance of the Government setting the fees and charges guidelines. Also the market value of logs was more related to changes in sawn timber prices, and could be seen as a normal commercial product, rather than being considered a Government service. Sawn timber price movements were more volatile than Government fees and charges, which were generally less than the annual rate of inflation.

The RES aimed to reflect the value of products that could be processed from a sawlog, and the cost of putting the sawn timber on the market. It achieved this by applying a complex equation. It was assumed that the total royalty bill should be distributed equitably between sawmillers. Licensees in more valuable forests close to market should pay higher royalty than those in remote and/or poorer quality forests.

The Base – Standard Mill Formula

Individual rates were built from a base royalty known as the Standard Mill Formula (SMF). This was the starting point for equalisation between sawmills. It was a notional mill door price for ‘scantling grade’ timber, including haulage costs, and was expressed as cents per cubic metre of sawn timber.

The SMF was used to apply the annual royalty increase by adjusting the SMF for the previous year by the increase for the current year. Hence, the SMF varied each year and was set at $84.53 per cubic metre green hardwood sawn timber in 1989 (Department of Conservation Forests and Lands, 1990).

The sawmill study information was converted to dollars on the basis of the relative prices of different grades of sawn timber. ‘Scantling grade’ was the assumed base grade and the divergence in price of the other grades is multiplied by their proportion outputs to calculate a divergence. For the above example, the divergence was calculated as follows:

Softwood sawlogs were separated into size classes and there were royalty premiums for size classes above the minimum which were sawlogs of less than 20 cm CDUB (centre diameter under bark). There were two quality classes within each size class, sawlogs and veneer logs. Veneer logs attracted an 18% premium above the sawlog royalty for equivalent size class.

Costs of Putting Sawn Timber on the Market

The RES was not a full residual stumpage price and did not include harvesting or sawmill processing costs.

The costs of log haul to a nominal sawmill location, known as the Point of Royalty Determination (PRD), and cartage of sawn timber to the assumed market were estimated and subtracted from a base royalty. Marketing zones (described below) were defined forest supply areas with different assumed key markets.

Schedules of rates per kilometre were used to convert distances carted over various classes of roads to dollars.
Consider the following example:

The calculation of the log haul and sawn haul allowances for the hypothetical example are shown in Figure 1. 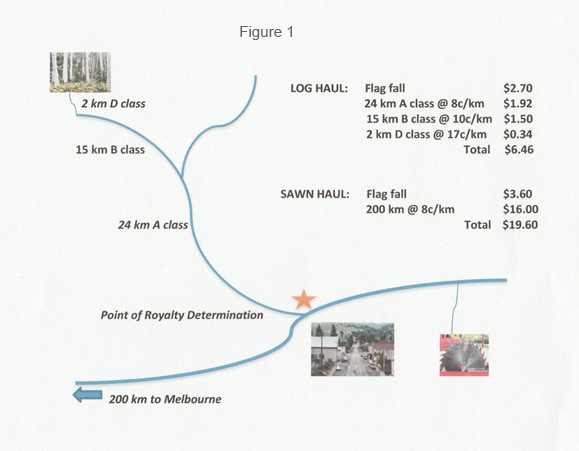 It was assumed that 30% of the sawlog volume was not converted to sawn timber and was available for conversion to woodchips. This was the sawmill residue and was charged at an appropriate pulpwood royalty. Consider a hypothetical example: 30% of pulpwood royalty of $9.60 = $2.88

Individual royalty rates for parcels of sawlogs were determined from the SMF by adding and subtracting for above factors. Log haul applied to log volume whereas the SMF, sawn haul and divergence applied to sawn timber volume. Hence, SMF, sawn haul and divergence were converted to log volume using the sawn recovery rate. Royalty would be calculated for the above hardwood hypothetical example as follows:

There were five marketing zones for hardwood sawlogs other than red gum as follows:

Certain further deductions to allow for special disadvantages or costs were applied. Thinning allowance could be made for operations in hardwood regrowth where special care was needed in felling and extraction to protect the retained stems. A residual logging allowance may be made in areas that were considered ‘cut out’ and the stands carried very low merchantable volume. When Sirex damaged trees occur in softwood plantations, a special reduction may be made in recognition of extra costs associated with ensuring against spread of the wasp.

Changes to the RES

The RES was only significantly changed twice in addition to the extension to include red gum and softwood logs since 1950. It was amended in 1984 following review in the previous year (Forests Advisory Committee, 1983). This amendment involved updating the equation factors and did not change the basic structure of the equation.

Substantial amendment occurred in 1990 (Department Conservation and Environment, 1991) to the RES for hardwood and softwood logs on the back of initiatives announced in the Government’s Timber Industry Strategy (TIS, 1986). The reviews that led to the changes included extensive public participation processes.

Significant changes had been implemented to the management of hardwood forests for timber production under the Timber Industry Strategy which necessitated changes to the RES. An important change with regard to log pricing involved the introduction of a log grading system and the allocation of logs of different species and grades to licensees based on their capacity to value-add the processing of the logs. Differences in sawlog quality were reflected in royalty by the application of standard recovery rates and output grades for different combinations of species, grades, size class and Forest Management Area group. The standard recoveries and output grades were developed from analysis of data from extensive sawmill studies at the time.

Other changes to the hardwood RES included:

Changes to the softwood RES included:

The RES was the basis of log prices for softwood logs until 1993 at the time of the establishment of the Government owned plantation enterprise, Victorian Plantations Corporation (VPC). Log pricing was then based on individual negotiations rather than a uniform price increase being applied to all customers. The RES was no longer used but the price differences that were inherent at the time were generally maintained, at least initially. A significant change under VPC was that arrangements moved from stumpage to mill door sales which negated the ‘royalty’ concept.

RES ceased being applied to hardwood logs with the establishment of VicForests in 2004. Full market pricing was introduced for existing supply agreements and an auction system was applied for uncommitted logs. VicForests also moved to mill door sales.

The RES was an administered partial residual pricing system. It was ‘fit for purpose’ in achieving the primary objective at the time of supporting the opening up of forests more distant from Melbourne by removing the disadvantages of higher costs associated with transporting logs and sawn timber form distant forests. This was to provide for the large increase in demand for timber, particularly structural timber, to support the post-World War II housing boom. This was also at a time when forests closer to Melbourne had been destroyed by the 1939 bushfires. These forests had been the major source of timber to the Melbourne market.

However, the RES failed to seek to establish and incorporate a market price for sawlogs. Nor did it reflect the basic commercial nature of the Government’s commercial enterprise or seek to ensure revenue at least met the cost of producing the logs. These shortcomings became more important over time and led to calls for reviewing the royalty system. Major reviews occurred in 1983 (Forests Advisory Committee, 1983) and 1985 (Timber Industry Inquiry, 1985). The main changes resulting from these reviews were expressed in the Government’s Timber Industry Strategy in 1986 (TIS, 1986). The changes involved the retention of the ‘equalisation’ principles of RES and required the pricing system to reflect the commercial basis of the enterprise. Timber production was to ensure at least four per cent return on funds invested and apply commercial accounting standards to timber production. This was to ensure the State received a commercial return on funds invested in timber production. This was achieved by amendments to the royalty systems in 1990 (DCFL, 1990) and 1991 (DCE, 1991).