Providing housing for Victoria’s rapidly expanding population from the mid-19th Century was important to the State’s growing prosperity, and a vigorous housing sector has continued to be integral to economic growth. Availability of housing materials underpins the sector and timber has always been a commonly-used material for house construction. This brief report considers the Forests Commission Victoria’s (FCV) role in supporting Victoria’s housing sector through providing timber from the State's forests.

The establishment of the FCV in 1919 was the culmination of a prolonged and fierce ‘fight for the forests’. At that time public forests were in a severely degraded state following widespread clearing, uncontrolled and illegal logging, and token payments of royalties. Poorly managed forests were unlikely to have been able to meet the timber requirements of the State’s expanding housing sector.

The FCV’s initial actions were to articulate policies on protection and expansion of the estate, sound forest management, expansion of softwood plantations, development of forest industries and soundly managing the finances of the newly-established organisation. The Commission was busy in the succeeding decades developing and implementing many and varied policies and practices to achieve these goals.

One important objective was to meet Victoria's timber needs. In its early years the State relied partly on imported timber for many uses including housing. There were calls for the State to increase timber production from local forests and thereby reduce its dependence on importations. The State’s native forests had considerable potential to provide large volumes of local timbers which proved suitable for many uses. The Commission devoted considerable attention to investigating the properties of local hardwood timbers and encouraging their use for new applications. Softwood timbers that were to come from the expansion of plantations were to augment hardwood timbers in meeting future local timber demand.

Victoria's forests and plantations provided many timber products over a number of decades including sawn timber, heavy construction timbers, railway sleepers, power and telephone poles, fencing materials, firewood and pulpwood for paper-making. Other important non-timber products were also sourced from public forests including eucalyptus oils and extractive materials such as gravel.

Providing timber to support the growth and development of the State was a primary forest management goal and sawn timber for housing was the predominant product from local sawmills.

Wood has been a primary material for shelter construction for almost all of human history. Its generally widespread availability, versatility in use, comparatively cheapness, ease of working and high performance in use have ensured timber's ongoing universal use, notwithstanding continually changing trends in applications in house construction. In more recent times the sustainability of timber is increasingly being recognised and is influencing its use in the construction sector, including housing.

One can conveniently consider two clear phases in the use of timber in housing in Victoria over the FCV's history, those being pre- and post-World War II.

The rate of house construction in Victoria between 1920 and 1939 appeared to have been relatively steady. The growing economy in the initial years would have supported increased housing construction but this positive growth was severely interrupted by the Great Depression from 1929. Economic growth and increased housing construction resumed for the few years from the mid-1930s until the outbreak of World War II, after which activities were re-directed towards the war effort.

Timber was the predominant building material during this two-decade period. Local green sawn hardwood timber was popularly used for wall and roof framing and sub-flooring. Dried and dressed local hardwood was commonly used for flooring, door and window frames and architraves. Local green hardwood timbers were used for fence posts, rails and palings. While some seasoned local hardwoods were used as exterior cladding, more often softwood weatherboards imported from Baltic countries were used for cladding, and Oregon imported from North America was used for structural timbers where higher strengths were required. The quantity of timber installed in an average house was quite high but the houses were of a moderate size by current standards.

It appears that the sawn timber produced from local forests comfortably met the market demand for housing timber during this period.

Sawn timber production from local hardwood logs increased to meet the needs of the war effort with only a very limited proportion of that timber being directed to house construction. This increase was achieved despite the considerable challenges arising from the destruction of large areas of Mountain Ash forests in the Central Highlands by the 1939 fires.

Sawn timber production increased rapidly in the five years following the war, more than doubling to 1,394,000 m3 by 1955. (The volume of sawn timber is estimated by assuming that 55% of the volume of sawlogs reported in FCV Annual Reports is recovered as sawn timber.)  In this post-war construction boom most of the timber was directed to increasing the housing stock. The increased demand for timber was met through increased efforts in salvage harvesting in forests burnt during the bush fires and the opening up of forests in eastern Victoria. But this increased production, coupled with the loss of large areas of the Central Highlands forests to bushfires, meant that log harvesting exceeded sustainable levels. Ongoing increases in log production could not continue. Following an initial jump in production in the early 1950s, the volume of sawn timber used in housing remained relatively static between 1956 and 1976 (Figure 1). 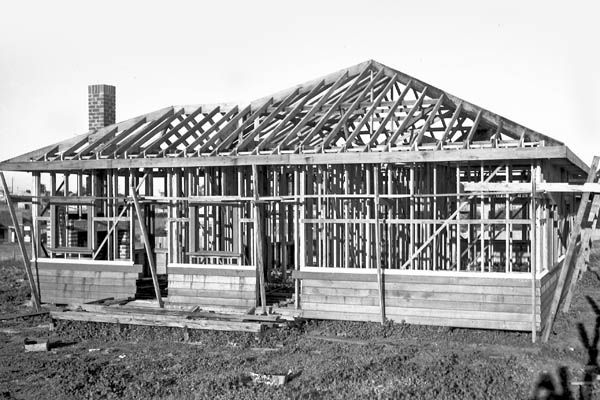 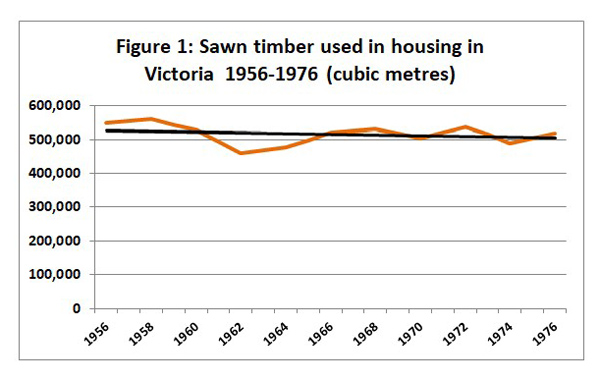 The increased demand was driven by government's desire to catch up on the deficiency in housing stock incurred as a result of the Great Depression and the war. Figure 2 shows that the number of new houses constructed each year increased steadily by an average of about 900 per year, from 20,700 in 1956 to 38,100 houses in 1976.

On face-value, one would expect that the increasing demand for housing, coupled with a trend towards larger houses, while timber supply remained static, would likely result in a shortage of timber - a situation that was observed to some extent. Notwithstanding the tight supply of timber, the FCV was able to maintain production at a level that sustained the expanding housing sector in the post-war economy because of a number of factors that enabled the demand for, and the supply of, local timber to be brought into balance. Some of these factors included changes in the way timber was used in house construction, an increase in the volume of imported timber and encouragement in the use of alternative building materials. These brought about the countervailing trends of increasing house sizes but decreasing volumes of timber used per unit of floor space.

While local green hardwood timber remained the predominant material for wall and roof framing, concrete sub-flooring and brick-veneer exterior cladding became increasingly popular. There was also a trend towards using particleboard flooring with carpet or cork covering instead of kiln-dried local hardwood flooring.  Alternative cladding materials also became popular because the volume of softwood weatherboards imported from the Baltic countries did not immediately recover after the War. Softwoods imported from North America, including Oregon and Western Red Cedar, were used for structural applications and window frames. Local green hardwood posts, rails and palings continued to be used for fencing because they were cheap. Although Victoria's softwood plantation estate was expanding during this time, local softwood timber remained a very limited component of the total timber supply until the late 1970s when harvesting increased from significant areas of maturing plantations. 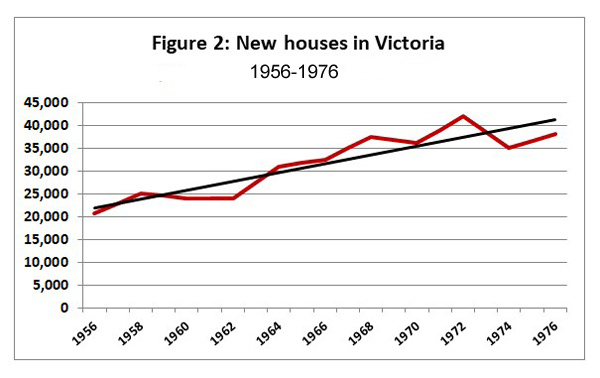 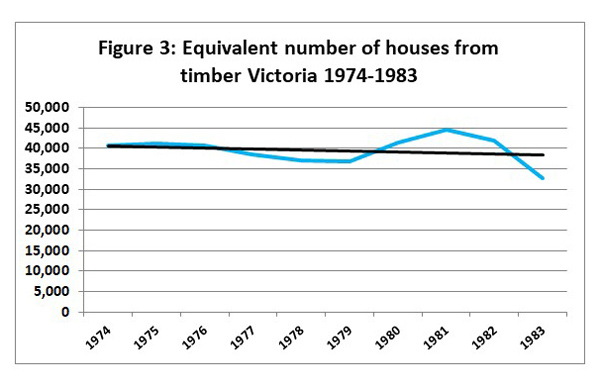 It is possible to estimate the equivalent number of houses that were constructed using timber derived from forests managed by the FCV, in the decade 1974 to 1983, by applying a number of assumptions to the total volume of hardwood and softwood sawlogs recorded in FCV Annual Reports, including:

The FCV contributed significantly to Victoria’s economic prosperity for more than six decades by ensuring there was an adequate supply of timber from local forests to support the State’s important housing sector.

Prior to World War II, the demand for timber for housing was subdued, partly as a result of the Great Depression. Sawlog production increased to meet the needs of the war effort but only a small proportion of this timber was used in house construction. The FCV supported the expanding post-war housing sector with an adequate supply of timber, the demand for which increased sharply from the early 1950s. Sawlog production was constrained and remained relatively static from the mid-1950s until 1983. Despite some shortages of local timber, changes occurred which balanced supply and demand. These included substitution of previously used timber applications with other wood-based and non-timber materials and increased timber imports. The most notable changes were the increased use of brick veneer for exterior cladding, concrete sub-flooring and particleboard flooring.

Figure 1: Australian Bureau of Statistics - statistics on sawn timber production.  The values in the table are estimates derived by the assumption that 70% of all sawn timber was used in housing.  'Dynamics of Carbon Stocks in Timber in Australian Residential Housing' (M. Kapambwe, F. Ximenes, P. Vinden and R. Keenan, 2009) refers to this proportion which was understood to have been relatively stable for several of the preceding decades.
Figure 2: Australian Bureau of Statistics, house numbers are the mean of new house approvals and new house starts.

Timber Resources of Victoria and Their Relation to Housing. AV Galbraith. 1943