"In connexion with the diminished supply of our most durable hardwoods, I must call special attention to the fact that by the alienation three years ago of about 30,000 acres of Moormbool forest, between Heathcote and the River Goulburn, we have lost the best part of the most valuable reserve in Victoria for the production of sleepers, beams, and piles. The young belts of timber in this reserve had been carefully protected for 25 years, and when its alienation was discussed the local residents sought, and expected to get, only 7,000 acres. They were permitted to get more than four times this area, despite strong protests from this Department, and repeated assurances to myself that no really good timber would be sacrificed. The soil of this land, a poor sandy loam running up on the higher levels to ironstone and gravel, was not of a kind to justify close settlement, and it is almost inevitable that in this dry district the history of earlier alienation from Moormbool reserve will be repeated, viz., the small selections will quickly, merge into bigger holdings, and become poor sheep paddocks. Already, the greater part of this once valuable forest is ringbarked, and the extensive belts of young spar and pole trees are dying or dead. Meanwhile, the State is called upon to expend large sums in costly plantations which cannot for 50 years at least replace what has been so wantonly destroyed." Conservator of Forests, H Mackay in the Department of State Forests, 1908-09.

For forty or more years from the 1880s, the then-named Warrowitue and Moormbool Forests produced wood in the form of mining timbers, firewood, sleepers and poles that was important for the development of Victoria. From about 1906 to 1927 many of these products were transported on tramlines operated by the McIvor Timber and Firewood Company.

"The Mclvor Timber & Firewood Company operated from its headquarters at Tooborac, central Victoria from 1906 to 1927. Its main purpose was to supply firewood to the Bendigo and Melbourne markets. The firewood was mostly obtained from private properties north-east and north of Tooborac. These properties were being cleared of their trees to enable their use for grazing."1

The Company decided to cease operations in 1927 because the Bendigo mines, which were major customers, were reducing operations significantly, there was little firewood remaining available from private property and briquettes from Yallourn were significantly reducing the overall market for firewood . The future of the Tramway became a subject for discussion by the Parliamentary Standing Committee on Railways. The Chairman of the FCV, W Code, presented evidence to the Committee.

Frank Stamford1 provides a wonderfully detailed account of the operations of the Company's operations out of Tooborac, and he has allowed us to produce maps from his publication which are linked above. In his account, Frank references the a Report2 prepared in 1927 to examine if the Government should purchase the tramways. Obviously such a purchase did not proceed although it was proposed that the Victorian Railways or the FCV might be a potential purchaser. Both documents provide some information about the scale of forestry operations in the Warrowitue and Moormbool Forests. Some of that information is provided in the extracts below.

The Forest and the Tramway


"The principal timbers growing in the Moormabool and Warrowitue forests are red and white ironbark, grey, yellow, and red box, redgum, golden and black wattle. The whole of the forest area has been operated on for the last 40 years, and the mature trees fit for sleepers and piles have been cut out. Mr. Code, Chairman of the Forests Commission, considered that there was an abundant supply of green firewood which would require cutting and drying, and also a supply of dead firewood. In his opinion, after ringbarking the trees should stand for six or seven years at least before being properly dry for cutting into firewood blocks. He was aware that lesser periods were stated to be sufficient, but he did not agree with those views. The Commission now had about 2,000 tons of firewood cut and stacked in the district for drying purposes ; they had tried unsuccessfully to sell it last year after three years' drying, the reason for refusal being that it was too green."1


"The district traversed by the McIvor tramway comprises a comparatively narrow strip of alienated land surrounded almost entirely by the Moormbool and Warrowitue (or Kilcorran) forests. Taking the area defined by the Railway Department as tributary to the proposed line, there are 191,500 acres, of which 84,000 acres are forest reserves, leaving 107,500 acres privately held, but this embraces land in the parishes of Gobarup, Cornell, and Redcastle, which are separated from the line by the Moormbool Forest, approximately 3 to 6 miles in width at those points. For the first few miles from the Mclvor Junction the soil, which is of silurian formation, is a light sandy loam interspersed with some ironstone gravel, and generally unattractive for agricultural purposes, while further north, except for occasional small patches, there is very little improvement."1 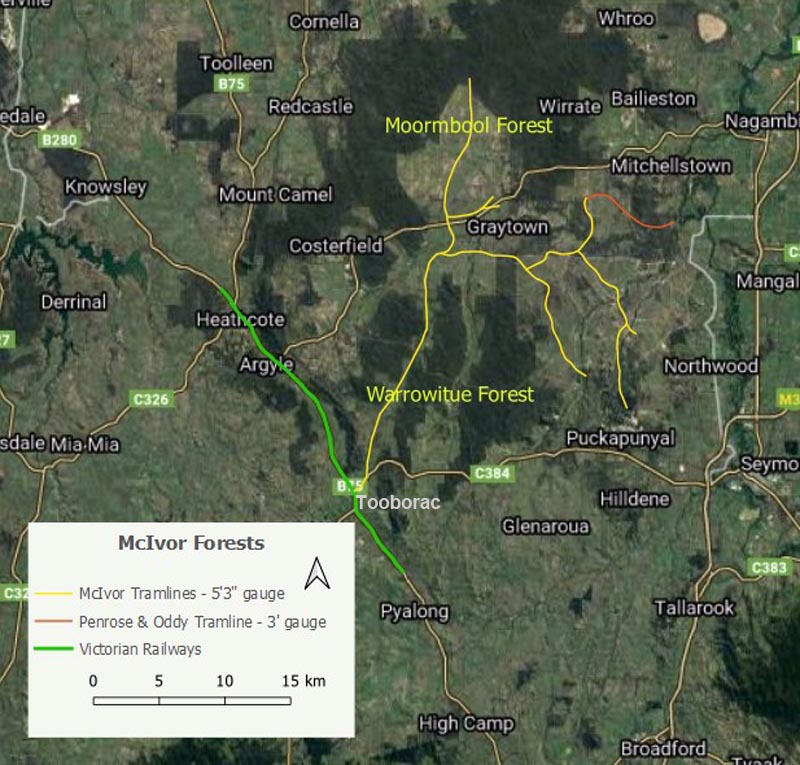 While most of the firewood produced by the Company came from private property it was also taking wood from State Forest as the royalties indicated below illustrate.

"Before the stoppage of most of the Bendigo mines large supplies of fuel were obtained. from this district, but now practically all those supplies are obtained from the Bendigo forest, 4 to 8 miles distant. The Forests Commission was approached three years ago by a representative of the Mclvor Company, who pointed out that it would be advisable to ringbark a lot of the timber in the district. Mr. Code informed him that the Commission had been ringbarking timber for years - the useless culls in the forest. Within the last three years the Commission has ringbarked some of the trees -which are regarded as fit only for firewood over an area of approximately 12,000 acres in various parts of the forest. Taking the whole forest area of nearly 120,000 acres, he considered that on a conservative basis it would contain 12 tons of firewood to the acre. Within about 6 miles of the tramway line, however, the best of the dead timber has been taken by the Mclvor Company in its operations during the last 20 years. On the 12,000 acres already ringbarked the average would be, say, 10 tons, or approximately one small truckload per acre. The Commission has about 60 men now employed in the forest, improving, ringbarking, and cleaning out blocks, which will then be closed for a term of 30 or 40 years, and the young timber allowed to mature. The royalties received by the Forests Commission during the last three years from, the Mclvor Company have averaged about £2,023 per annum."1

"As to supplies other than firewood. (which will become available during the cleaning up of the forest), the following extracts from Mr. Code's evidence make clear the remoteness of any substantial traffic in this direction, (ie. outwards) viz.:"
'The Moormbool and Warrowitue Forests in the Heathcote and Rushworth districts are practically cut out of the best timber for hewing rectangular sleepers. Only a limited number of men are now employed in this industry. In the course of improvement work the whole of the inferior timber is being converted into firewood, posts, sleepers, or for what it is best adapted. The blocks operated on will then be closed against cutting operations, and it will take at least 50 or 60 years to produce timber suitable for piles and sleepers, but similar timbers in the shape of telegraph poles may be taken out in about 30 years.'1

As usual the pressure was on the forest manager to forsake a more valuable wood supply in the long term for short term commercial gain. Some things never change.

"There is a difference of opinion as to the better trees being ready for sawmilling. The local feeling is that many trees are ready now; the view of the Forests Commission is that those trees will not be fit for milling for some considerable time. As to the suitability of the trees for firewood purposes, the opinion in the district is that many trees are being preserved which should be ringbarked, for firewood, the contention being that they will never be fit for anything else. The Forests Commission considers those trees too good for firewood, and holds that they should be left for milling purposes. The Committee's view is that, while the Forests Commission is in the main right as to much of the milling timber being immature, it might impress on its officers that they could be a little more liberal in their interpretation of what is a firewood tree, as distinct from a milling tree, and make more firewood available to cutters."1

"One of the reasons for the shortage of suitable timber arose from a difference of opinion between the Company and the Forests Commission on what type of timber was fit only for firewood. In 1923 the Company approached the FCV suggesting a lot of timber in the district should be ringbarked, so that it would become available for use as firewood. The Commission's officers felt that this timber was of better quality than firewood, so the ringbarking was not done." 2

Apart from firewood, there were obviously significant numbers of sleepers and poles cut from these forests.

"There are about 16,000 sleepers (this is in 1920) stacked along the tram line. All these sleepers are passed and paid for, but owing to the shortage of trucks they cannot be sent away:There is also a large number of telegraph and telephone poles on the line, but cannot be removed for the same cause."2

"Other important traffic was five-foot and seven-foot timbers for the Bendigo mines, sleepers for the Victorian Railways, and in later years carrying of telegraph poles in Victorian Railways QR wagons. These poles were carried on behalf of the State Forests Department, who frequently advertised in the following terms:

STATE FORESTS DEPARTMENT
Offers will be received for snigging of not less than 500 telegraph poles into heaps of not less than 10 poles and carting same to the Mclvor Company's Tramline, Cherrington, a distance of from one to two miles; poles being 20 ft, 24 ft, 25 ft, 26 ft, 28 ft, and 30 ft. Also for loading above into trucks.'

"On 4 August 1921 the Forests Commission invited tenders for cartage of up to a thousand telegraph poles from 20 to 40 ft in length."1


Should the FCV Purchase the Tramway?


"As to the line being taken over by the Forests Commission and worked as a light line, Mr. W. Code, Chairman of that body, expressed the view that the Forests Commission would sooner not have it, and preferred that the Railways Commissioners should own and operate the line. The Forests Commission has 8 or 10 miles of narrow-gauge line with a locomotive and rolling-stock in operation now near Erica, on the Moe-Walhalla line, and does not desire to embark upon a broad-gauge venture." 1

A large area of the Moormbool Forest is now within the Heathcote-Graytown National Park, and most of the Warrowitue Forest is in the Puckapunyal Military Training Area.